Wow...HDR by Photomatix works
I spent the day, well until about 1 when I needed to head down the hill, shooting with HDR in mind. Recall if you will HDR means High Dynamic Range and Photomatix is a program that allows us non photoshopCS2 types to explore that aspect of digital imaging.
To a large degree this program is pretty idiot proof (and yours truly needs all the help he can get some days). It does take a lot of finesse to get images that don't have a lot of ghosting or odd highlights at tone boundary's. As time goes by I'll get a better understanding on what hdr can or can't do. The finesse will come as I work with the program and learn its limitations better.
Today's project was to go out and pick through situations that are buggers to shoot, high contrast, shadows in naturally dark objects and highlights on very white objects all in the same scene. A digital camera I've discovered has a narrow range of contrast it can handle not unlike silver based chromes (aka slide films like ektachrome). So up into the San Gabriel Mountains I went to shoot in the worst possible conditions for extremes of contrast to see what HDR could do.
After a little exploring the other day it is painfully obvious that if you are to avoid any problems with ghosting and registration you must shoot with a tripod. Something I have only rarely done as it prevents me from easily and quickly bouncing around to get just the right angle and framing on a subject. Its a personal preference, kind of like a chihauhau type pooch...I have to bounce around freely and a tripod slows me down. That aside, it is invaluable when shooting with HDR in mind so I worked with it.
I used the recommended 2 f-stop bracketing from recommended exposure value which is the default in photomatix. I shot them in RAW which is a format where all the detail in the scene is preserved in its raw or "as shot" state by the camera with no compression which produces very big files. Fortunately the EOS20D does the bracketing automatically so once in place is bang, bang, bang on the shutter release and its done.
For Alder Creek I took the 3 exposures and used the "Shadow and Light - enhanced" tool to blend the 3 RAW files into one image. I saved the file then opened it with Photoshop and did my post processing for color balance and contrast cleaning up. I was impressed with the final image.
For comparison purposes I took the RAW file with average metering, adjusted it with Canon's "Digital Photo Professional" and adjusted the white balance to neutral then adjusted the brightness which then was converted to a jpeg for editing in photoshop. The final adjustments were then to refine color balance, saturation and contrast.
The differences in Shadow detail and highlight detail while preserving a natural luminosity was very good with the HDR image. HDR also did a very good job in keeping highlight detail....look a the detail in the extremely light gray alders in the background. Both involved the use of the base EV RAW file and somewhere along the line the HDR file lost some of the color richness to the simply converted RAW to JPEG used in the comparison. In this image at least the richness in the red/browns was lost in the HDR conversion more so than the blue/greens. Not that its objectionable, but my penchant for wanting deeply saturated color does make me question how much I am willing to trade for expanded gray ranges in the final image. Something to ponder and explore.
What I do see in all of this is that it will be very interesting to see how this expanded range will work into my impressionist images on watercolor paper. Also a few of my old loves, antiquated interiors and night photography may be the areas where HDR may have its greatest impact.
While I ponder it all, look at "Alder Creek" in its Base EV and HDR conversions and enjoy them on their own merits. 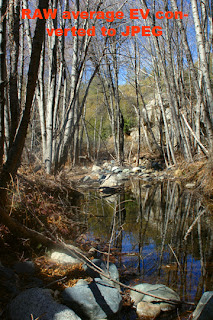 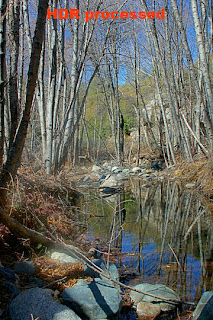