OK...for those of you shooting with a digital slr you know the tricks calm place for lens changes, body facing down while lens is off, use only a soft squeeze bulb to clean out the sensor cavity if needed. In my haste for stuff last week I goofed majorly and discovered it while shooting. My sensor was dirty and when I got back down the hill was cleaning lenses to prevent further contamination etc., when for reasons I don't know I grabbed a can of "dust off" and shot it in the cavity. My luck it was just humid enough that the blast of cold air instantly condensed and a wave of moisture hit the sensor and "fogged" it with propellant.
Sadly, Canon was no use....several days turn around, no guaranteed completion date, and a couple of hundred dollars to the rescue. A little research and talking with local pro-shops I discovered a little gem in nearby Pasadena who not only had turn around times of same day to a couple days max and inexpensive on top of it. Cleaning up the sensor was a total of 3 days (dropped off Wednesday AM and picked up Friday afternoon) for $65. And they did awesome work that included a pic taken before and after cleaning. So...the info on this gem:
General Camera, 2218 E Colorado Blvd, Pasadena CA 91107, 626 449-4533. Ask for Sabrina as she was the gem who helped me out.
Anyway, today I got back up into the mountains and shot once again with HDR in mind. I am discovering that the HDR only can do so much to in terms of blending, after that its up to your eye and use of Photoshop for the final blending to bring in a natural appearing image.
I shot "Alder Creek" using HDR post processing to blend 3 images, average exposure and bracketed plus or minus 2 stops. That final file is then post processed in Photoshop to restore some contrast and sharpening.
I do like HDR. The color saturation is much more pronounced through out an image. In this scene there is the added problem of light rocks surrounded by shadow where in the avg exposure jpeg most of the detail is lost and the sky lacks a lot of color. In the hdr not only do the light rocks have a lot of detail, there is more detail in the shadows and color overall is very saturated with a rich blue sky. More natural in terms of what I saw rather than what the camera captured on an average exposure.
Now its off to explore how far I can push limits with the program. This is getting interesting. In the mean time enjoy "alder creek" and note the differences between the HDR final image and the JPEG Avg exposure. 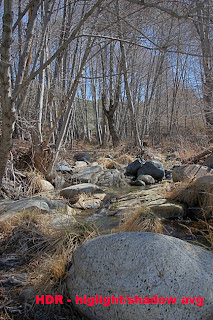 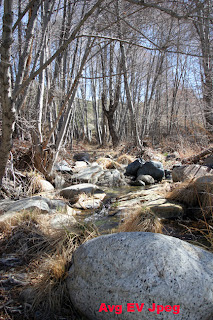