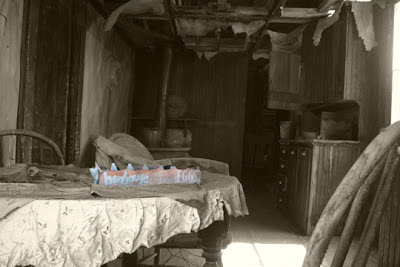 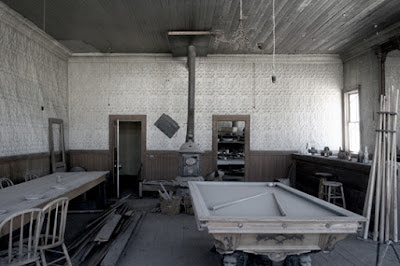 A couple of my past favorite images actually wound up being the most commented on at the Meet and Greet last night at California Wine and Cheese. I'll be showing there another 2 weeks, if you want to go see it do so. If you would like to meet and discuss the work let me know as I am minutes away and able to take the time.

Thanks to all who came to support, old friends (Ruth and Coop), New friends (Will), old coworkers and new found artist pals. It was fun. The conversation about the art of photography vs the technical stuff was fun...thanks Coop.

The best part for me still is talking with people about what I do and learning what struck a cord with them. My series using a couple of different techniques to pay homage to the old Dutch Masters and their wonderful skies didn't escape anyone.

The surprise was that the group from Bodie still strike a cord with so many people. Natural lighting and capturing old building in their state of "arrested decay" has been something I've always enjoyed doing especially when I can convey its prior joi de vivre and human connection. (I have to admit the term "arrested decay" was coined by Will's friend who joined him on the Gold Line bike ride to the event but worth using, including as a tag). Nice to know something I do strikes a cord with so many especially when it's something I like doing.

Anyway, its another busy day in the space behind the garage. A few things to prep and get ready for tonight's Art Walk sponsored by the Monrovia Art Festival Association from 6:30 to 9:30 on Myrtle Avenue in the heart of Old Town. Map here.

Just a little sampling of what I have on show at the California Wine and Cheese shop here in Monrovia. The piece is a watercolor photograph titled "Pietra Blanca Lighthouse".

The artist "Meet and Greet" will take place Friday August 24, 2007, 5:30PM - 8:30PM. Tell the owner Tom Duggan or his bartender that you are there for the art and they will have available a specially priced Red or White wine for you.

California Wine and Cheese is a new business here in Monrovia that fills a gap missing in adult oriented evenings out since the Wine of the Month Club closed down its tasting room. They specialize in as the name implies the unique wine and cheeses of California. It's quite the deal, they have "flights" of usually 4-6 wines from a particular, grape, region or vintner available for purchase. Tom and his staff tell you about the wine, what makes it special and how to detect the difference. And to satisfy the tummy as well as the pallet they offer up cheese platters tailored to your "flight" so you learn about that kind of paring. It makes for a terrific night now...now if we can get them to come up with a dessert offering to finish the flight it would be perfect.

Apologies for the lack of new stuff to entertain but the last couple of weeks have been murder around here between weather and migraine triggers.

I got strung up today...in that good happy kinda way! 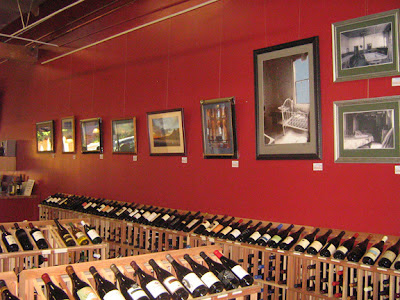 I finally got installed at the California Wine and Cheese today. A bit later than planned but that was outside the control of myself and the owner Tom Dugan. It was due to our waiting for the museum style "arakawa" hanging system to arrive. Its there and set up which makes installations so very easy.
All that said...I wound up bringing along a piece that Tom liked and noted on his site the following: "We do not know which works he has chosen, but my favorite on his blog site is "Seine Dusk." Just incredible colors. " Well Tom if you read this am glad to have accommodated, even if by accident for you as it is a piece I like too. I thank you as well for giving me a chance to showcase my work in your establishment!
Most of the pieces have been here and maybe even shown as a work in progress on my flickr page. I can't say that I have any new pieces to debut as those were done the end of July at the Art Walk. What I am bringing is a range of work illustrating from traditional photographs, into HDR and into my more impressionistic watercolor photographs.
The catalog:
"Rose Blossom" - photograph
"Game Over, Bodie Hotel" - photograph
"Henhouse Eggs" - photograph/digital art
"Bodie Blue Window" - photograph/digital art
"Chapel of St John the Evangelist" - HDR Photograph
"Desert Sunrise" - watercolor photograph
"Pietra Blanca Lighthouse" - watercolor photograph
"Siene Dusk" - HDR watercolor photograph
"Not James Dean" - HDR photograph
"Old Faithful" - HDR Photograph
Now for the fun stuff, the reception is set for Friday August 24, 2007. As soon as I have the details I'll let you know more but we are looking at something like a 5-9PM to catch all the after work crowd. I also understand one of the local wineries based in Sierra Madre may have a representative there that night so this could make for a lot more fun.
If you want a personal notecard with the details leave me a not with your email addy or snail mail!
Posted by frazgo at 6:57 PM 2 comments:

While researching the HDR and Tonemapping I stumbled across a rather interesting flickr group. Interesting if not belligerent, in my not so humble opinion, regarding tonemapping of single shot images and displaying the same in their group. It is their group, but sheesh.... Their deal is landscapes only, never HDR which is created by blending multiple exposures of the same frame.

Interesting concept, the tonemapping of single exposures that is to say. Their results in many ways move into the surreal as well. It certainly has its place with portraits and documenting the human condition as much as it does in doing landscapes. Maybe better than HDR as you don't have to worry about a person moving and losing your registration, not that I don't use that to my advantage at times. Just variations on the possibilities.

They have a brief discussion and the photos posted to this group are worked in Photomatix from a RAW file as part of the conversion process to tiff or jpeg for final working. This is different than using Adobe Photoshop CS2 highlight/shadow tool and the results are pretty amazing.

Today was one of those days where I had enough of the task stuff like filing, errand running, mounting and sleeving prints and I just wanted to experiment.

I had several images shot while taking one of the Thames River boats from Greenwich to London that were shot late in the day. I shot raw using the metered average exposure. Problem with that is late in the day you have very long shadows with extreme contrast. The large amounts of sky and reflections of the same off the water wounded up exposing them beautifully but left the shadows very dark. I couldn't shoot them with HDR as the between the forward motion of the boat and the rocking would have yielded frames too far apart to ever register successfully for an HDR image. I wasn't too happy with the results and as such never did much with them. Until now.

The before and after exposures below are the original frame converted to jpeg and sized for here. It had no corrections done and serves as the base image for comparison. The image below is the tonemapped version of the same RAW file. I used Photomatix Tonemapping to accomplish that task. Note there is detail across the board in the shadow areas, much cleaner color yet the sky has its own luminosity that helps the whole image work. Different perspective of Big Ben and certainly much nicer too look at. (Can you tell what time it was when I took the picture?)

Regardless, enjoy the picture and I highly recommend taking one of the commuter ferry's while in London to soak in more of the city and of course get you to Greenwich to see all that is there to explore. More leisurely than the train, but more colorful given your captains are not tour guides and give you a much better and crustier version of the history as you float along. 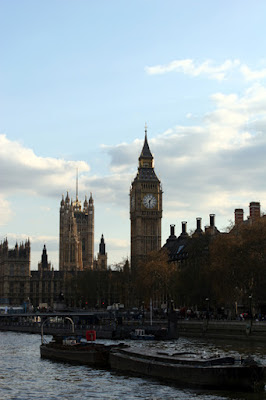 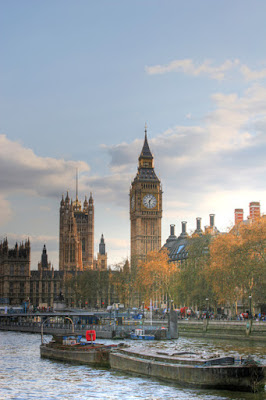 Posted by frazgo at 3:30 PM No comments:

Actually, I probably overdid it this last week getting ready for the Art Walk and for being hung at the California Wine and Cheese shop here in good old Monrovia this coming weekend. I suspect its my old "friend" CFS raising its ugly head but I'll shake it off quick. Have too...I have to hang Saturday.

Isn't the take on the Hollywood sign a riot! I can't take credit for finding the sight. My blog pal Julia from blogging.la posted it on metroblogging this morning. Have fun with the sign am off to get some dinner done and off to bed early today. You can make your own HERE!

Posted by frazgo at 4:43 PM No comments: