warm and fuzzy
Sitting at a ball game this afternoon I noticed the bunting had a nice flow. Using selective focus helped blur out some annoying background stuff that was more "noise" than important detail.
Playing around a bit more I opted to let the balloons drift of into a nice fuzzy too. Doing so let them just become some nice colored shapes rather than a detail. Doing so let the bunting and its changes in direction become the main energy source to tease your eye.
Getting there isn't easy with an automated point and shooter, but the SLR's have the "creative" wheel that lets you make decisions on how you want to show. Here I took the "aperture value" dialed in a low number that limited the dept of focus. Gave me the fuzzy balloons with details in the bunting I wanted.
Bet you were glad to see something other than HDR. Stay tuned as Monday I plan on being in viewing distance of the behemoth Airbus 380 makes it maiden voyage arrival here at LAX. I learned about it at MetrobloggingLA. I remember seeing the Concorde glide over Big Ben and Westminster years ago and was just in awe over that beauty. Now its the polar opposite beast flying over, hope it thrills as much.
Until then...enjoy "bunting and balloons". 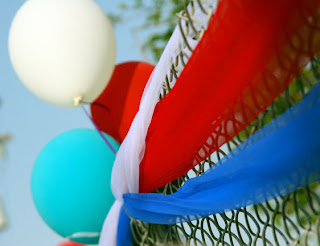