Worse than a kid at Christmas

I am so amped over my new toy Photomatrix so I can explore High Dynamic Range photograhy. I barely slept and was up early today reviewing the manuals and getting a grip on the basics. The frustration lies in that I can't get out right now as my dance card is very full today.

I went through my library of images that I have shot in the past bracketing to try out the program and ran into a stumbling block of sorts. I shot all without the benefit of a tripod and as a result the images are just far enough out of registration that the results were full of bizarre artifacts and ghosts. That might work when I want to exploit the programs abilities for the impressionist or surreal qualities later, right now I need to nail the program basics. (I like to exploit and do things on purpose rather than give it up to chance).

Ever anxious to practice I pulled out the camera and started with a shot of my living room corner. It has a huge range of grays as there is an open window with sky behind it (extreme light) and a couple of gray leather chairs (about as absolute black as you can get). Exposing on an average you get nice detail in the blinds but the interior is lacking all detail. Exposing for the outside makes the interior coal black. Exposing for the interior leaves the outside glowing like some sort of A-bomb aftermath.

I shot it with the camera on tripod to remove the registration issues. I then shot the scene using average and very extreme under and over exposure from the metered average. Photomatrix then was used to open the 3 files, and using the variety of blending tools I was able to put together a nicely merged file for further post processing in Photoshop.


So here you go my living room as a test subject. I have the images placed in under exposed, overexposed, average exposure with the final HDR image in the end. To make the manageable files I compressed with jpg so there is some loss of minute detail, but you get the overall idea. Look at the HDR...details on the floor and darkest parts of the chair and some detail out the window all with a nice range of grays and saturated color in between.

I think I'm going to like HDR...maybe in time for my one may show at the Monrovia Coffee Company in April? 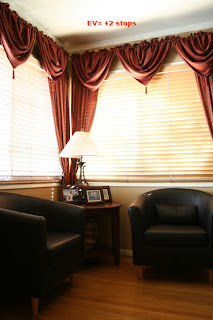 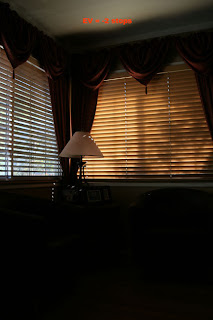 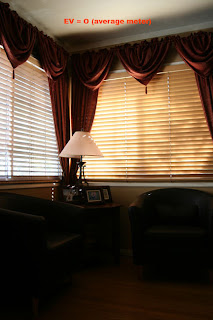