Learning is fun, a walk in the woods is better
I'm still learning the range of capability HDR (High Dynamic Range) photography. Working in the digital realm has so many advantages and the tools out there just increase how fast and how varied you can make the final image.
Today I hiked up Monrovia Canyon, in the San Gabriel Mountains above my house. I debated a bit then left the tripod home. I figured I'd try standing really still and where possible brace against trees or rocks. I was too lazy to bring the tripod and knew that the 2 foot wide ledges I wanted to shoot from wouldn't have the space to have a tripod fully extended. Wish I had brought it as there were many shots that I took where there was just enough movement that the multiple exposures needed for HDR were too far out of registration to be workable as a straight forward photograph. (Call me a bit anal but I want to be able to nail down HDR before I start pushing it further...makes retracing steps easier when you fully understand a process).
Today's shooting was in a location where the sides of the canyon were in shadow with either very dark granite sides or near black Canyon and Coast Oaks with the creek and near white skinned Alders in the sunlight. Difficult to shoot in, even more so when you are working in a medium with a narrow contrast range such as digital (or ?chrome silver based films).
So while I sort through my images I have one of the first I finished posted for right now. This morning it was really foggy and starting to clear when I hit the canyon. The sun had just started to crest the ridge. Leaving areas in intense sunlight with others still in shadow. There were areas where the fog remained which HDR helped better define details like the line between fog and clear sky. HDR really captures the clarity and saturation of color the way a single exposure, even when done well in RAW.
I have learned the hard way, for the last time....you can't hand hold a camera and get 3 exact framed images. Add in the wind causing ripples in the leaves, your registration gets out of whack way to fast. Tripods are a must, no matter the weight and difficult terrain.
Anyway...Monrovia Canyon Morning...I shot it all RAW. The HDR image was post processed and saved as jpeg, low res for your viewing here. The jpeg side started as a single raw image, post processed to get it as close to the HDR as possible in the mid-tones and converted to jpeg at the same low res for more of an apple-to-apple comparison. The RAW image for both middle range of the HDR and the one labled JPEG was the same file....the average metered exposure for the scene. 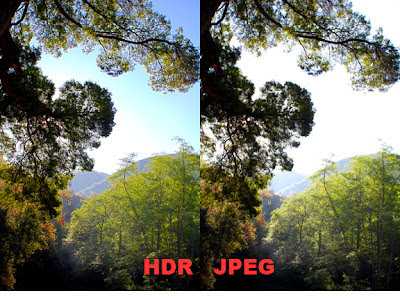