Double up on the Starbucks and lemon bars...its going to be a long night

I started with a Meyer Lemon tree so overloaded I needed to do some harvesting. What better way to get a sugar buzz and use up a dozen lemons that that. I used Ina Garten's Lemon Bar recipe from Barefoot Contessa...its the SUGGA BOMB!

I did it and glad I did. Tired, but the first of the images from tonight's shoot down at the Monrovia Train station with an eye towards exploiting HDR has me totally amped. (Having a Venti Sumatra and a lemon bar helped).

I just got back, downloaded it all from the trusty cam and loaded one image to see if HDR would do for night photography that I hoped it would. IT did! I got a final image that first appears flat as so much detail is recorded across the board from absolute black to white...can't help that as the lighting is crap....sodium vapor on one side, fluorescent in some shops, HID or incadescent bulbs on the cars. Its really extreme contrast. HDR pulls it all together so you have great detail across the board though the raw HDR is very flat in terms of contrast. Post processing helps control the colors and all the shifts due to the light sources and wow.

The interesting thing for me was the surreal haunting images you get at night anyway. HDR really just takes it to the next level.

For you techies the base exposure at ISO 400, shot raw with a relatively large f~stop of 5.6 and exposure of 2.5 seconds. I used the Canon EF20-34mm wide angle zoom and the effective focal length for the shot was 32MM, manually focused. (I love the elongated perspective of that lens). The bracketed exposures at 2 stops over and under were .6 and 10 seconds.

So here is the first of the series shot at the train station. Love abandoned buildings, like shooting them at night...and HDR makes the images even more surreal and haunting. Anyone wanna take a run up some of the ghost towns on Route 66 the next full moon? Image those old places with a rising or setting moon. Moonrise Hernandez Ala Ansel Adams may get a run for its money.

Anyway...enjoy "Monrovia Train Station" while I finish sorting and HDR'ing some more images. (If you want to see the jpeg average for comparison...ask and I'll send you a down sized). 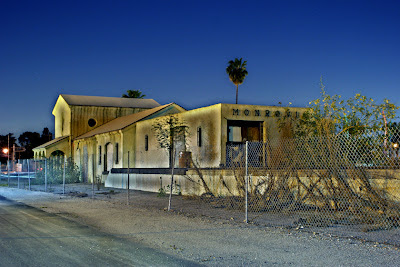