Its been as much fun as Christmas around here...
Today was one of those blah days, can't shake that stomach bug that I have managed to pick up along with a few other neighbors. Not enough to lay me out, just slowing me down.
Gorgeous day here and unfortunately I wasn't up to getting out. So....I dug through my library of images of nearby Monrovia Canyon and the waterfalls. I shot several about a month ago and just didn't have the skills with HDR to merge them where they looked natural. Well, natural in terms of registration and final picture.
I'm getting the hang of tone-mapping. When I work with these digital photographs I tend to recreate them with the look of Kodachrome, at least the look of those done in the early years through the 60's when they tended to be deeper saturated emphasising the warmer tones more than the cool. (Later films like Kodachrome 25/64 and later were still deeply saturated but more neutral in rendition which did very well in the commercial marketplace...but lacked the character in my humble opinion of the earlier films).
So I took some time today working up a few of the images controlling the micro contrasts and saturation a bit, running them through virtual photographer and its various tools to mimic those wonderful old Kodachrome's of yore and get images that look like they popped out of a 1940 and 50's era National Geographic.
HDR is a real life saver with Digital. Gives one so much more range in terms of tonal scale that you can focus on greater detail in the shadows and highlights and still have a balance within your darks and brights. Love it, especially when I can use it to share with the viewer what I saw rather than what the camera simply recorded. Its a real life jacket in capturing scenes where you have light rocks and a waterfall deep in a very steep dark canyon...like Monrovia Canyon Falls.
Enjoy "Monrovia Canyon Dawn" and "Monrovia Canyon Falls" and its off to bed for me now! 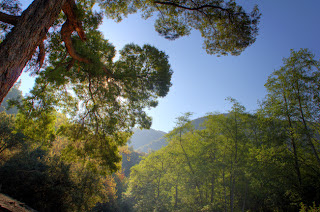 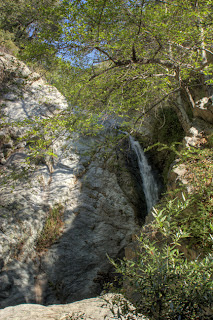