Last of the London HDR done
I finally cleared out the folders of stuff shot in HDR. I am so torn on what to do with this tool in my little bag-o-tools. Whether to go natural or surreal is a path I keep exploring.
The potential to go surreal tended to pull me more last night and down that path I went. HDR captures so much that I went out to exploit the depth of color and took it down the path of the exaggerated colors of the 1930's Kodachromes and postcards of that era.
London was experiencing record breaking temps the week we were there and spring sprung fast. There were literally fields of daffodils, naturalized all over the parks in the city. I shot a few all over the place. The one I worked up to look more like the 1930's postcard done on a Kodachrome here was shot in St. James Park at the end opposite of Buckingham Palace. HDR did a really nice job of preserving the highlight and shadow detail...especially in the brilliant white "Paper White" daffodils which actually were crosshatched with the shadow of a very large tree near by which I made pretty much disappear with the various tools within Photomatix.
The other image also was shot in HDR and post processed in Photomatix, then through the Virtual Photographer plug in for Photoshop CS. It was taken at St James Palace and the tiered sections of the palace and the chimney's made a nice stair step to the clouds above. Sort of an allegorical reference to how the Kings believed they held the job due to divine right.
Anyway...enjoy them and I'm taking a quick lunch break and going back to working on the "Tour Eiffel" HDR series later. 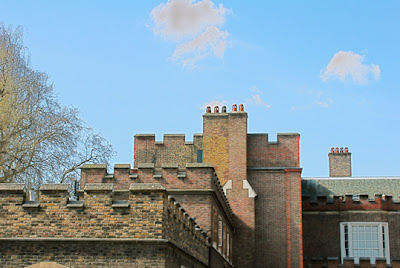 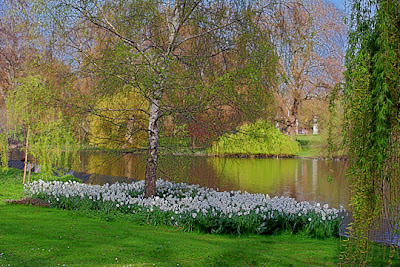