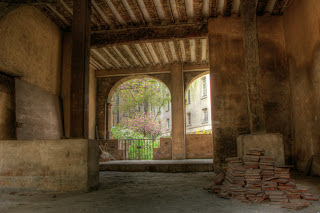 This old abandoned church was explored briefly while taking a walking tour in the Jewish Quarter in Paris. (I had other things to get done that day like indulge my other passion , cooking and eating well, and needed to get to E. Dehillerin before it closed that afternoon). The church reportedly was being gutted and going to be rebuilt as shops and a restaurant. What grabbed my eye in the first place was on the other side it opened up to a courtyard shared by several apartment buildings. This courtyard was once part of the convent and rectory gardens. The whole building could be traced back to the 1600's. That little pocket of nature surrounded by ancient to very old man made structures posed a nice contrast.

I spent this morning learning how to get the most out of HDR and tone mapping. HDR is my current obsession and tone mapping was the latest conquest on the old learning curve. I am happy with the final result here, much more so than what I was able to get by using the automated pre-programmed stuff in Photomatix.

Now the details, this is a bracketed shot shot with a 20-35mm wide angle lens at the 20mm setting. I love this lense when I want to capture as much of a scene as possible with maximum depth of field. The base EV was 1/20 second, f8 and an ISO of 400. The other two exposures were bracketed +/- a stop on either side of that base. All were shot in RAW format so I didn't lose a single pixel.

The fun came in when I started to use the Tone mapping plugin for Photoshop. The controls are very user friendly and let you control so many variables that the results are much more what I envisioned when I shot the image as opposed to what the preprogrammed filters allow. The final image here loses a lot when its made small enough for the web, but you get a good idea of what the real deal looks like. Wahoo it sure is fun to learn more stuff.

This image will be with me in its "artist proof" version Friday night where I will be one of 2 artists featured at the Paint n Play 2 open house being run in conjunction with the "Family Festival". The details Friday, April 27, 2007 6:30 - 9PM. 418 S Myrtle, Monrovia, CA 91016. (PnP is located 2 doors south of the theatre in the center of Old Town).