Real vs Surreal
A healthy dose of jet lag added into the mix and I keep wandering back and forth across the two liberally today.
HDR for those of you not following this blog is something I have been exploring a bit lately. If you want more details read the entry's from the last month or so for all the details. Short version is that you shoot your images exposing for the shadows, mid-tones and highlights and then use a program such as photomatix to meld them together giving you a higher dynamic range of colors and grays than can be captured with a single exposure.
HDR users out there have formed into two camps (It perplexes me why we humans do this, but we do). One camp is the "natural" guys who use it to only expand the range of the image while still looking natural. The other group is the "surreal" guys who make use of the program's ability to create surreal images by over emphasising the ranges and how they interplay with each other. Me...I run in both camps like a wild man and a hedge clipper (skip scissors those are kind of light duty risk taking).
So as I sit here in my fog meandering down both paths I worked an image that appeals to me an a few different levels. Both started with the same 3 raw files and were worked up differently. One is more natural, the other is going towards the surreal almost illustrative interpretation of what was there. I shot this overlooking the Edgware Road Station in London just before dawn.
The added bonus is that HDR since it is 3 separate images shot a fraction of a second apart you get some interesting ghosting from images that move. This becomes very noticeable in the long exposures needed at dawn which is why I tend to like the surreal version of the scene better.
Decide for yourself and enjoy two different versions of "Edgware Road Station" 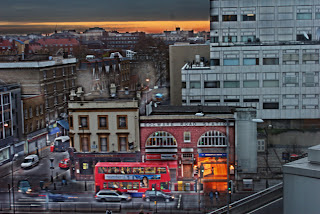 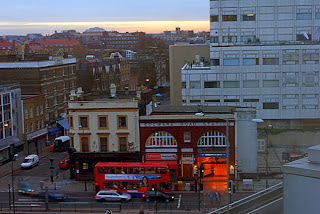