College was for experimentation... 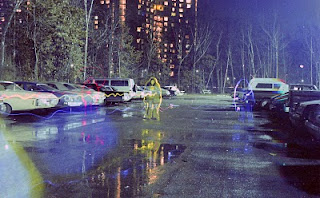 When I was in college I opted to go a different route in my shooting as well as in the labs. Instead of "subtractive" color printing where one used filters of like colors to subtract out colors in the final print for one that was balanced I opted for "additive". In additive one exposed each layer of the paper by using a deep colored red, yellow or blue filter between the enlarger and paper. A bit more time consuming, but in my opinion yielded much richer color from the old kodacolor or ektacolor pro films I was using at the time.
I even took the "additive" filters out into the real world with me shooting. I'd take a big honking 4X5 view camera out and with those same filters shoot black and white images through them one at a time yielding 3 negatives, one for each filter. Then I'd print them, on color paper one negative at a time through the corresponding filter I shot it with, often frustrated as hell with getting registration right, until I got a final image.
This image was done with the additive filters as well. Instead of shooting black and white I had shot with kodacolor. It was a long time exposure and I inserted the additive filters, one at a time in front of the lens with the shutter held open for several minutes total. As each color was inserted I'd use a light to "draw" outlines around the model and "flash" them with a strobe. It yielded 3 different colors of light drawing on one film, yet the total scene was in approximate accurate color, or as accurate as one could get given the multiple color of light sources illuminating the scene. Of course I had some wild color shifts until I learned how to meter and gauge how much time was needed in order to expose each layer of film and yield a fairly accurate image. Crazy the things we think of and experiment with while in college...but that is what those years are for, right?
Posted by frazgo at 8:48 AM