My blogging pal, Will Campbell that I met through Blogging.la has this fun Flickr group called "Fauxtography". Its altered photos. Not pretending to be anything but. I've tossed a few up. In the end the group actually has tossed up some fun images.


Enjoy "MHS" that I added to the pool. I shot it with my new che-ez, 3rd one in as many years. I post processed it with Paintshop and Photoshop. Redid the sky only while masking out the school as safe then put it all back together again. 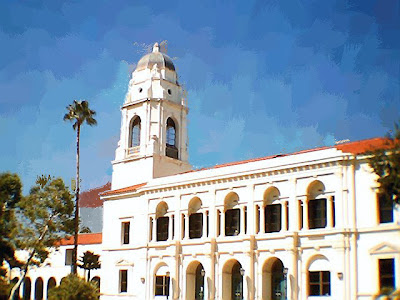 It's in the Flickr group but also is going to be the pic used in an article I will be posting shortly regarding the haunting at Monrovia High School. It will appear on Blogging.la next week sometime along with a few other local & LA haunts if I am lucky and find the time to write them.


Speaking of Blogging.la yours truly posted his 100th article this week along with the tag "annoying you one key stroke at a time". I am having fun so its all good.
Posted by frazgo at 8:36 PM