Its not often that you get validation as a starting artist from the community, but when it happens wahoo the adrenaline is running. I run on the premise that the piece works if I can stop someone in their tracks to really look at the image. When that happens then I did alright. That is usually enough, but when you get a lot of attention its a real ego boost.

I worked on a set of prints exploring man-made vs nature over the last year. A lot of elements came together in a print I did of the old Monrovia Rail Station. The shoot itself was fun simply because of the character of the old station. It was part of the old Santa Fe passenger rail system that ran from Chicago to LA back in the early 1900's.

In fact Monrovia got its name from the conductors on the railroad. The town was established as "Monroe" some 120 years ago. Monroe was one of the stops along the way into San Bernardino, and conductors would call the route "Monroe Via Pasadena...." and eventually we became known as Monrovia. Local trivia, but what the hell good is a brain if you don't fill it full of stuff. Anyway the old station is in disrepair but still has a wonderful patina. It sits there waiting for restoration.
One of my pictures done there was a seperation and abstraction of nature with some artificial colors introduced versus the manmade simply given more depth and printed on wet watercolor paper (HP forgive me, but that is more fun than you can imagine...try it some time). I showed it at the Monrovia Art Festival Association's "Acknowledge the Arts event at the Historic Aztec Hotel here in Monrovia. It got a lot of attention by everyone that viewed it that evening.

What really got me amped was that City Council Member Joe Garcia liked it enough to purchase it that night. He is going to donate it and have it hung in the station after it is rehabbed and converted to the new Goldline Metrolink station. How cool is that!? Of course it is clearly and cleany labled "frazgo" so there is no doubt it is my stuff! Out of fear of jynxing the deal I held off announcing until the transaction was finalized. Wahoo it happened tonight.

Anyway....here's a photo of the print they bought to donate to the new station - 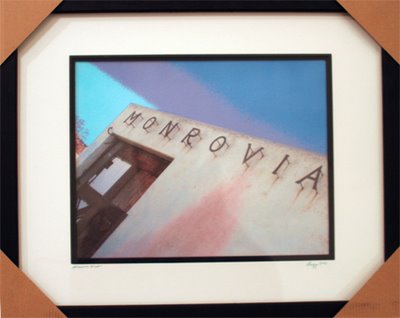