Life is funny and you never know which way you'll twist in the wind. Two week ends ago I was showing at a local event and one of my more manipulated photos exploring the real and unreal caused the stir. (It will eventually make it to my sites web page when updated later this month). Now I get a call on a few of my traditional images. So which do I explore next?

I am torn once again between competing factions within my little brain. It doesn't help that I can't pick one photographer or style that has influenced me. I certainly can appreciate Paul Strand and his work with the Photo-Secessionists did early in the last century and it certainly is a direction and theme I've explored a lot lately. But then again there is the whole F64 group with hero's most of you know in that movement Ansel Adams and Edward Weston. Its this latter group that I've visited and explored many times over the years.

This group is really focused on straight photography, technically accurate recording of the world on the other side of the lens. They drew their name from the ultra-sharp focus you get when you "stop down" your lens to its smallest aperature. My explorations of late have been with an ultra-wide angle lens that adds some distortion while being very sharply focused across the scene. My explorations now have been the down low foreground with the grander scene behind it. Most of it has been in black and white (paying homage to Adams?) but its all been about exploring the relationships within nature. An example is "alder creek canyon" which I am pleased with. 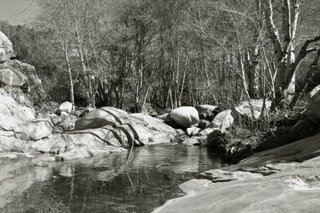 So where do I go next? I have no idea its just another "go dog go" ride for me today.