I don't know where I get the energy late at night, but I do and have done so for years. Many of the images I like best are when I an too tired to think, the brain shifts into autopilot for the mechanical stuff and the rest wanders about exploring images that I saw in my head when I took the photographs in the first place.

I have been in California for over 20 years and this state never ceases to amaze or simply take my breath away. Yosemite is one of the many treasures here that does both. Maybe I shouldn't have the old Mamma and Papa's song "California Dreaming" at the moment as it just pulls me to the sullen and melancholy, but I digress. Between the LA area I call home and the rest of the state I continue to explore I am still in awe that I live here.

A bit over a year ago I spent a long weekend in late winter in Yosemite near Yosemite Falls and the Merced River. The river itself captured my interest that visit. I was up before dawn one morning and hiked along the river watching the sunrise slowly illuminate the mountains around me. Being winter there was snow all over. Fog developed as the warm moist air from an approaching storm crossed over the colder expanses of the meadows. It was so cool watching the color of light change as the sun rose. It was truly amazing to see how the fog changed and altered the sun's rays as they entered the meadows from between the peaks around me.

It was as much the steely gray of the pre-dawn as being in Ansel Adams territory that inspired me to view so much of the area in shades of gray. There still is an odd romanticisim to black and white photographs that appeals to me.

So as I sat and printed tonight I also remade a few in black and white. Enjoy these two images from a late winters dawn! 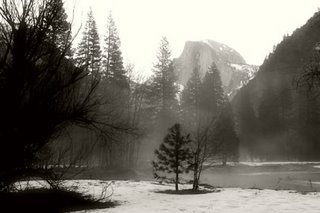 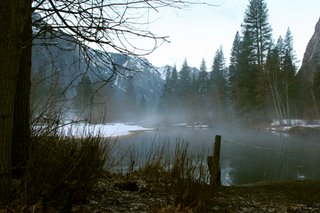