Running down the impressionist path..... 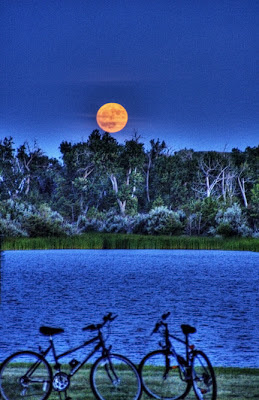 "Moon over the Missouri" Pierre, SD 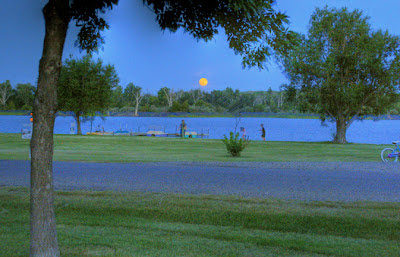 "Moonrise at the docks" Pierre, SD

I had some fun with these images. Big discovery today was that very long time exposures with digital media makes incredible noise. Along the lines of many, many multicolored dots, dashes and crosshatches all over the image much like the color shifts and accentuated grain you get with silver film when you "push" it. (Pushing is a technique where you expose the film at a speed higher than it is rated then increase the development time and temperature to push the film to that new speed).

Another interesting phenom that I was prepared for was that the movement of the moon due to mutha earth's rotation would cause shifts in the position of the moon in the sky when you shoot long exposures. It even got funkier when I shot with HDR in mind as I wound up getting 3 images of the moon in the sky. At least the clone stamp was able to get rid of the extra moons for these images. Another time around I just may let them stay and make them a centerpiece but that's more than my tired brain is ready to handle at the moment.

These images were shot shortly after sunset as the moon was rising at Farm Island State Park in Pierre, South Dakota. I had the camera mounted on a tripod as the exposures ranged from 2 seconds all the way to 30 seconds in the bracketing +/- 2 stops from average exposure. I used Photomatix to merge the 3 raw files to create the HDR file. From there they were denoised, cloned and whatever else needed in Photoshop and converted to 8bit jpeg for here. (Pesky details but out there some geeky type like me likes that info).

Enjoy my little foray into the surreal from the real this morning!