I applaud the Sioux....Crazy Horse is amazing 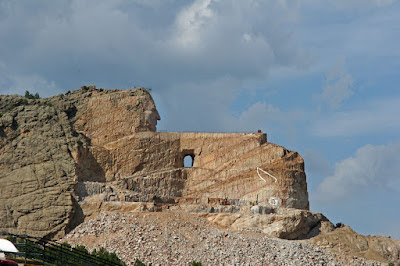 On the road trip we stopped in the Black Hills to explore a bit. Among the stops was the Crazy Horse Memorial. (Sorry for the lack of links but....wifi just blows, slow and takes forever to get much done).

The Memorial is part of a huge North American Indian Heritage site that will eventually include a university and medical school that will fill many acres at the base of the mountain where the statute is being carved out of the mountain.

The Sioux deserve a lot of credit in this. They had the idea some 55 years ago to build a monument to preserve the heritage and culture and move forward. They have been offered Federal and State money in the past to get the statute done faster but turned it down as they want to do it themselves. They rely on private and corporate donations to move this forward.

While at the visitors center I asked if the other tribes, especially those with gambling income have been contributing. I pointed out that I know from experience that the Pechanga children get 10 grand a month each and wanted to know if the Pechanga and Pala tribes have contributed. The answer I got was that no, the money is mostly coming from the Indian Nations in the Plains States so far and little of it comes from gaming revenue. I asked if they have approached the tribes raking in the gambling revenue to help build this North American Indian Heritage Center and he said there had been discussions and went on to tend to a customer looking a some paintings. So...I don't know if the gaming rich tribes are helping or not, or even if asked but it seems to me that such a noble cause to preserve their culture they should be all over that project.

Anyway, I have a few more things to post before its all over here. I do have a fairly decent wifi this morning and none of the local activities start until later today so I'll try to get it done....

Until then, Happy July 4th from Sheridan Wyoming!