Inspiration and ideas come from a variety of sources. This morning a neighbor happened to see me and dropped off a DVD he had on Ansel Adams. Its a biography of him and his work, lots of interviews with him, his family and admirers. Its from a PBS documentary and really well done once you get past the droning music and the whole PBS agenda.

The new thing I learned about the man is that he was also a prolific writer and wrote over 5,000 letters to the editor on a variety of topics as he believed that is a way to mould and direct a social agenda. This documentary really focused on the Sierra Mountains of California primarily Yosemite down to Kings Canyon and Sequoia. They spent just enough time one of my favorite photographs if his, "Moonrise Hernandez" which illustrated nicely how man fits into the bigger world around us to make the entire DVD worth watching.

This documentary brought for a lot of information about the man, much of it new or at least a new interpretation of what he did and why. He saw the world different than us in so many respects. Some of it because as the documentary put it, he was likely a "hyperactive" child and jumped quickly and very deeply into things that interested him. In his work you see his changes in themes over the years and how he worked them in his images. No matter what phase of his career you look at it is obvious he is the great meanderer of the fine art photographers always purposely wandering about and sharing his vision of the world. Meanders I think are by their nature, hyperactive children that luckily never out grew it or had it beat out of them.

Early work had a very high horizon line forcing you to look at the landscape itself, later had the lower horizon line forcing you to soak in the landscape and sky together and draw comparisons regarding the greater space of it all. The one thing the latter years brought out that influences me heavily was the use of darkened sky's to illustrate the depth of space. I tend to go a bit further most of the time and shoot not only later in the day where the depth of color (or shades of gray) is so much greater, but prefer to have clouds. Clouds for me are the ultimate piece of nature that we can't control and add so much drama it helps me illustrate better my feel for the time and space as I meandered through it.

So much for the trivia, I am always amazed how well he manipulated the image at the camera level through exposure and developing, then in the darkroom to get the final image he shared with us.

I have the PC and a bank of images from this summers road trips that move me when done in black and white. So as I meander down the road of black and white I still explore the relationships of man vs nature, or nature's elements with each other. "Pumice Road" and "Mosquito Range Treeline" are today's work. 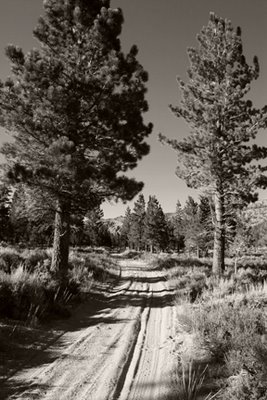 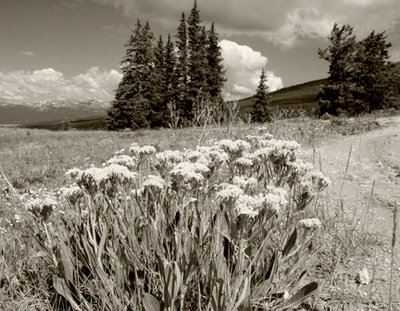