Title inspiration from the strangest places


The video from YouTube is what gave me the idea for the title, a little explanation after the vid. 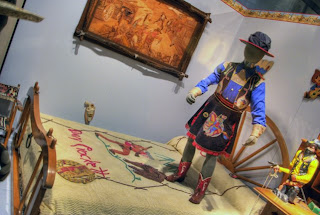 Note the image above, its part of the "Duck and Cover" series that I will be installing 1/3/09 at the Focus One Gallery here in Monrovia.
I wrote about this image and a few others in the series a while back.  I accidentally started a series of HDR photos of dioramas that I worked into very surreal images almost refreezing the moment.  Shooting it I knew that the spots and floods used were all different colors of light which I used to move it further into the unnatural.  I did that by exaggerating the color shifts.  They may have started as a photograph but the quickly morphed into something other than a simple recording of a scene.
There was a quality to the images that I wound up exaggerating that reminded me of the pictures of the A-bomb tests from the Cold War era.  I have to admit I struggled with what to call the series.
At the risk of severely dating myself there was event in particular that struck a note in me when I was in Kindergarten.  It was the Cuban Missile Crisis.  I don't remember much of the details but I remember being in South Dakota at the time visiting my great-grandmother.  My Mom's cousin whom we stayed with and all the adults were glued to Walter Cronkite and the TV and worried aloud what it all meant.  Thankfully history records well how it ended.
In the weeks after that I have memories of being told about "the bomb" and how to "Duck and Cover" to save ourselves in the event the bomb came.  (Reality check, in the UP of MI at the time we were well outside of striking range, and if we were hit we'd be a glowing ash regardless if we did the duck and cover or not).  Many years later I watched the film "Atomic Cafe".  Watching that film I remembered that video from my childhood.
I did a quick little YouTube search and found the video that matches a sound track I had found a while back.
Duck and Cover the series will be 4 images.  They will be framed and matted artists proofs, done as if on old fashioned deckle edged glossy photo paper, just like you would have found the pictures done up in your granny's photo album back in the day.
Once opening reception details are ironed out, I'll post here and you all will be invited.
Posted by frazgo at 12:37 PM

That is so funny and cool and nostalgic--just a teensy bit scary underneath. I can't wait to see it.

Thanks Miss H, there should be an artists reception and will include you in the list of invitees.

It was a strange time, we tend to forget the scary stuff and move forward with the good memories intact.