all I wanted to be was googleable...yes I made a new verb 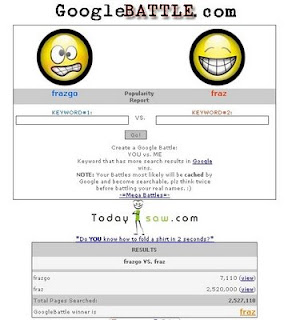 It was a silly midlife crisis thingy.  I wanted to be googleable.  Its that insecure time in a guys life when you realize...oh shit I'm how old and what mark will I have left on the planet other than a granite marker on a plot of land.
For kicks and giggles I googled my real name, my email name "frazgo" from an employer at the time and virtually nothing.  Random stuff, little had to do with me.  I had a couple of little web pages or blogs before then and had sorta stopped fooling with them as my cube job was demanding more of my time as my responsibilities increased.
2oo2 was the year I decided I could either work myself to death in a cube knowing if I dropped dead they would just roll me off the chair into a bucket and have someone else there before the seat was cold.  Or...walk out, retire with what little I had and start a new life.  A new me.  One that would make a difference with the fam, the kids in particular and give me a chance to do some thing that made my heart sing.  I went back to doing my photo.
I started using "frazgo" at the suggestion of an old friend from college who just liked the ring of it.  All of as the cube warehouse knew each other by our email addy's and even took them to our personal emails.  I already was known as frazgo by many and when it came time to set myself apart from the past I grabbed the handle and ran with it.  It took.
Today I took part in the google battle.  Damn...the number of hits for frazgo and fraz were amazing.  I know I can get a million hits on the real name, the nom-de-plums...in the mills also, but to see it in smiley faces left me gobsmacked.  Of course the "fraz" are all over the board, but "frazgo" is just me and that is even funnier to know some gabacho with a keyboard is able to leave a mark out there.
Take the test yourself at googlebattle.com  Let me know your results.
Word of caution watch the use of your real name as even that query will be cached and visible until the last electron flows and the last server on the planet dies as the sun finally fades away.  Pretty permanent mark.  I like it.
Posted by frazgo at 8:10 PM