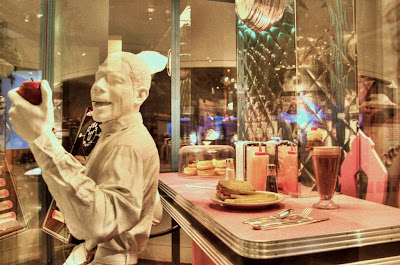 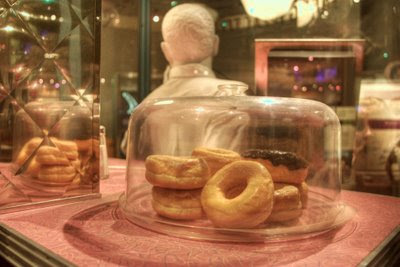 I accidentally started a new series of exploration.  I do it without thinking about it.  Often.  Then suddenly one day, out of no where it seems I see a group of related images suddenly coalescing before my very eyes.  Dang, another path to meander down further.  As if I don't explore enough as it is.
I've blathered on in the past how I love the surreal effects you can get out of posting processing bracketed images with High Dynamic Range.  HDR is a method I go back to constantly as it gives me total control of the gray scale and how elements appear through manipulation of the micro contrast, saturation and a host of other tools in Photomatix.  Yup, still digging it and love the paths it opens up.
Monday was a school holiday and we packed it up and headed over to the CA Science Center near USC in Downtown LA.   One of the floors was dedicated entirely to biology and how things work.  Giggles and chortles of the youngest aside, there were some interesting and informative dioramas.  Museums love those things, I do to for other reasons it turns out.  I shot away the one of the guy in the diner that was part of the digestion explanation.  I post processed it.
The frames I shot were both startling and compelling and I couldn't get them right easily. "Right" as in color was off, too far off to do what I wanted due to all of the various artificial lights, some with filters no less illuminating the scene.  When it was all said and done I was happy with the results.
It wasn't until I posted them in flickr I realized that I had a new series in the making.  I don't even know what to call it.  Without thinking some done a few weeks ago were done with a purposeful cold-war-nostalgic-surreal-frozen-in-a-nuke flash.  I now have 5 images, 3 with human forms in a frozen moment, totally unreal in a surreal environment.  It clicked.  I need to explore this more.  Dummies in Dioramas frozen in an atomic flash.  Interesting...
But what to name it?  "Atomic Cafe" has been taken, though that is as good an explanation of what sort of set they could fall into.  Anyone want to toss out a name for the set?  HDR Humans has been taken, and this doesn't qualify as my subjects aren't human, only human in form.
Of course this got me thinking about what Miss Havisham wrote in her blog regarding when enough is enough in a painting.  I commented on her post and she commented back: "Thank you, Frazgo. What is your take on when to know something is done?  It’s so much easier with cooking."  If I knew the answer Miss H I'd tell you.  If I knew the answer I'd either be a rich man or a fool for sharing with everyone free of cost.
In the digital world it is pretty easy to eliminate steps that don't work and revert to a starting place.  In painting its different as removing rarely can be done.  I think understanding when the piece says what you want it to say is the first step in recognising when something is done.  Tasting with your eyes to see if it is done is very personal so I don't think there is a pat answer.
Enjoy the two pieces from the yet un-named set.  I call them "Donuts" and "Wired Diner Man".
ps...this weekend is the MAFA Celebrate the Arts, a fine art event, here in Monrovia at the north end of Old Town, in the Monrovia Community Center.  Its free Sat/Sun 10-6.  I'll be inside, pay me a visit if you have the time.
Posted by frazgo at 1:04 PM

Yes. I think it is the most fascinating question to ask any artist--when do you know it is done. There is always the danger whether digital or paint that the piece is overworked. Yes, it is hard to delete in paint but it can be done. I've done it with turpentine and sandpaper. I've put up lights behind the painting to see how the layers play. It's an interesting discovery sometimes. And, with painting there is the brushstrokes to consider ala sidelong view. The masters knew this.

Aren't we fortunate to be able to talk in this way? Thank you!

All my best to you.

I will visit Monrovia this weekend-forsheezy.

Thanks Miss H and of course every artist will have his own answer and method to his madness for determining done.