gigabytes are cheap...
I had this bright idea today to see what would happen if you simply adjusted a normally exposed raw file +2 and -2 EV with the raw processor that comes bundled with the EOS20d and save myself some card space when out shooting. In theory you should be able to manufacture the exposure range needed for creating an HDR file then using tone mapping to bring about an image with detail across the board.
I found out the hard way funky stuff happens, especially when you make the conversion down to 8bits and into jpeg. You start getting noise and other bizarre artifacts that leave you with something that has colorshifted and lost detail. My suspicion is that the simple act of altering ev with a program isn't giving me the detail at other end, rather its just lightening it all up. When its married into an hdr format you pick up too much conflict and the program simply starts doing an "either/or/nor" routine. End result is a picture that is marginal in the detail picked up in the extremes of the gray scale and way too much loss of detail. More than I am willing to live with at least.
So....gigabytes are cheap do the 3 or more exposures needed and let your programs work with the date the way it was intended. An 8 gig card still takes a lot to fill it up even when shooting 3 raw images of each scene.
Anyway..from a recent photo shoot, a nice stretch of the Angeles Crest Highway. Shot RAW and converted to jpeg and smallified to fit here. 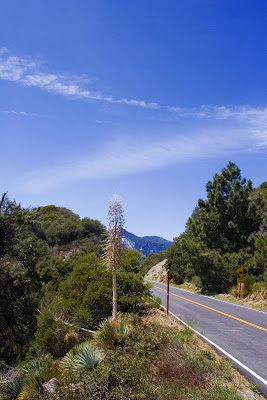