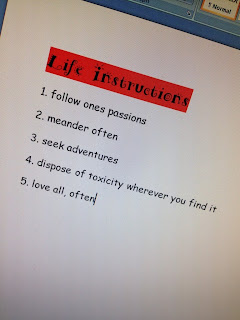 I play an online game called Snapcious.  Its played with your iPhone or Andoid with the Snapcious App.  Its pretty simple to play.  Winning is about bragging rights and not much more.  You open the app, search the missions  and shoot, post and you are done.  It even gives you the option to post to other social media sights like facebook, twitter, flickr, pinterest etc.,.

One of the missions this week is "life instructions".  I thought about doing something cheeky, then opted to go with verbalizing my thoughts and snapping a pic of the screen.  There you go, my 5 points to having a happy life.

Ont the topic of life, been busy of late.  Did a commercial shoot for a realtor friend of mine who was in a bind.  Was quite pleased with the results.  I did flash and natural light, the latter is far more artsy in my not so humble...  The link to see what they chose HERE.  A sample of my favorites : 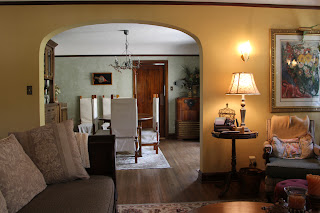 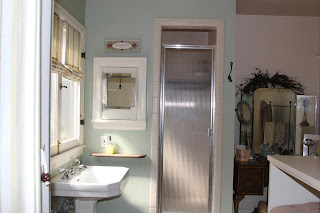 I've also been busy with SoCalAutoBlog and blogging.la of late.  Both keep me busy with adventures and photo ops.  I mean cars and Los Angeles does it get much better for adventures?

I also did a fun commercial shoot for a website that a friend of mine is doing the marketing work for its new web site.  Citadel Exploration is the companies name.  My mission was to make oil wells look pretty.  I did quite well. The shoot encompassed 2 days of shooting.  The first was a complete and utter wash out, literally as it poured buckets on us.  Who knew it rained heavy in SoCal in spring!  The camera got really wet and I wound up having to shoot the second day all in manual mode as the metering somehow lost its ability to control shutter speed.  Argh...at least I knew how to go old school exposure calculating from ASA (now we call it ISO but that's a whole different story) the shutter/f-stop calculations for zone and pulled it all off.

The big bonus in this?  Well I got a new camera.  An EOS 60D that I'm just now getting the hang of using in manual mode.  The old EOS 20D is gonna get fixed then be a spare/backup as it still produces stunning images at 8 mega pixels which is more than enough for real estate and commercial shoots that will be web based.  Big stuff..the 60D will rule as it can go easily 4 FEET by 6 FEET!

The commercial stuff is fun and it pays the bills...the art stuff nourishes the soul.  Its all good, now I need to go create some art.