Cars...how to shoot 'em in the wild

Cars can be, but shouldn't be a challenge.  Picking the right lens helps if you are DSLR enabled, adjusting zoom if you use a point and squirt.. I shot pretty exclusively with a wide angle Canon 20-35mm for this purpose with the 70-200 zoom reserved for the detail shots.  Why this combo? A variety.

Cars benefit from the exaggerated perspective that only a while angle lens can bring to the table. With a point and squirt you have zoom ratios, move in close and zoom out to get the same effect.  It makes it all look longer and wider emphasising the lines.  The wider angle view also enables you to shoot in crowds without having to back off and wait for  a break in traffic to get your shot.

Depth of Field.  I've talked about it in the past in prior posts.  In short the greater the lens the greater the depth of field, or area of focus you get an any given aperture (f-stop to us old schoolers).  At 20mm my wide angle lens is pretty all encompassing focus which you need when up close and personal with a car.  The shot of the Thunderbird at the lead to this post if shot from a distance to fill the frame would have not only compressed the car to make it look short and squat but would have run the risk of having the front corner in focus with the rear out of focus.  Not a good thing when you are shooting something this big.

Get down low and up close and personal.  That means drop down to one knee, bend over or do what it takes so your camera is level to slight above the fender peaks.  It will yield a dramatic image every time showcasing the lines and curves that some designer spent hours at some point drawing out.

Anecdotally yesterday I was at the 23rd Annual Street Rods Forever car show here in Monrovia.  There was an old dude (isn't that the kettle calling the pot black) who had a DSLR on a tripod.  With a moderate length lens.  He would go from car to car and set himself up for his shots, not unlike what I did here, but at a distance of maybe 10 feet and would sit on a stool crabbing at people to get out of his way.  How rude, gives photographers a bad name.  In a crowd you gotta be mobile and as unobtrusive as possible.

Don't be afraid to take multiple shots of the same car from different angles and perspectives.  Don't be afraid to deviate from straight on.  Stand up tall, shoot with the camera tilted to fill the frame, this view can add a feeling of movement and power to the car.  Try to get from behind as well for pictures, its not always possible because of parking or thats where the owner stashed his chairs and cooler to sit out the show, but try. 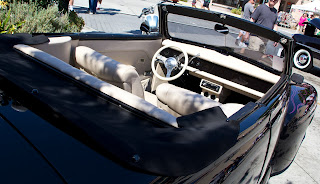 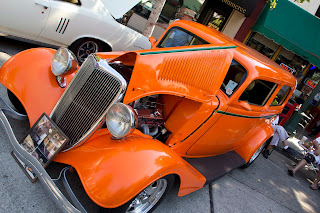 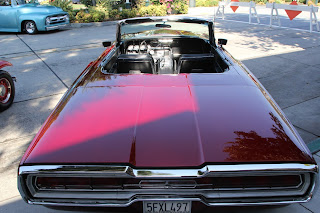 Take several shots of the car, not just the big picture with the whole machine.  Zoom in for details.  Those details are what add character to a car. Either it was done by the designer back in the day when it was just a dream or by some customizer who thought it would add something to the character of the car.  Could be the logo in pot metal, the arc on a fin or wheel well or a sticker added by the gear head at the end.  Its a signature piece that makes up the whole.  Those details also make interesting images.  Those details were sweat at the design stage, show them off now. 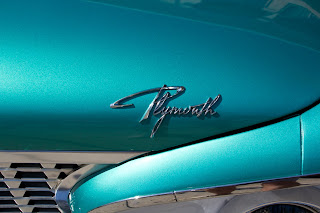 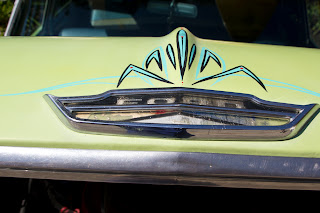 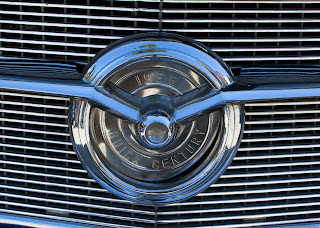 I rarely shoot a car head on unless its part of a series of images to illustrate the entire car.  Often I grab 3 shots with only 1 at the head on level.  I find the images that illustrate the dimensionality of the car as a sculptural piece are much more effective.  Varying angles and frame just add to the story of the car and goes beyond mere documenting what it looked like.

My only gripe here is that owners of hot rods in particular, but nicely restored car owners do it too, is that so much was put into the mechanics of the car they want to show off the engine.  To do that they show the car with the hood up!  Nice for detail pics of the engine, but that gaping maw sure ruins the looks of an otherwise nicely sculpted machine.  You can ask them to drop the hood and some may do just that, others will look at you like you are speaking in tongue.

The big tip here is to shoot lots from a variety of angles so your photo sets tell a story of the car(s) you chose to focus on.  Even if you are taking a couple of some generally interesting cars using these tips you will have stand out images that are different than simply cataloging what you saw.  At yesterdays show there were over 200 cars there, I shot maybe 3 in depth as outlined above, the rest that got my eye, about a 3rd of them I took a couple of shots varying perspective and angle so I would have enough to remember the basics.

Enjoy these images, they do get larger if you click on them.  If you want to see them in their jpeg large from you can check out the entire set on flickr.