Bullwinkle and his Daffodil Poem 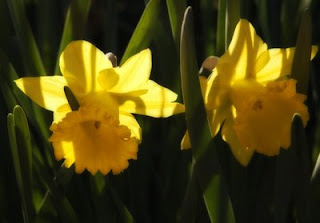 Meet Rocky and Bullwinkle.  While meandering around my garden I thought of that silly cartoon show and named these two in their honor.  Of course the poem "Daffodils" that Bullwinkle would recite was running rampant through my grey matter at the time.
The poem itself is by Dorothy Wordsworth and appeared in The Grasmere Journal if the wiki is correct:
I never saw daffodils so beautiful they grew among the mossy stones about and about them,
some rested their heads upon these stones as on a pillow for weariness and the rest tossed and reeled and danced and seemed as if they verily laughed with the wind that blew upon them over the lake,
they looked so gay ever dancing ever changing.
The image is post processed from RAW in the orton style.  The final image was post processed in Virtual Photographer to remove the cyan cast since this was largely shot in the shade. Enjoy.
Posted by frazgo at 3:13 PM