Tone mapping to the rescue 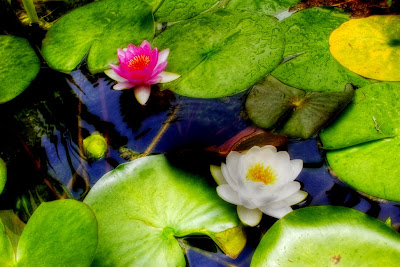 I'm a full tonal range kinda guy. Yes, I do like lots of contrast, but recording a scene you are left to the limitations of your recording device. Digital sensors have improved tremendously over the years, but the process of converting to jpeg and then converting to a monitor a lot of that range is lost. Working from an uncompressed, all the detail there RAW file is the best way to start processing an image. NEARLY everything in the scene is there, it just needs to be coaxed out.

Tone mapping to the rescue. This program allows you to plot the parameters of your image so the range can be displayed on whatever medium you are using. Most common...your monitor and printer ranges.

For this image the jpeg displayed the pool inky black with a total lack of detail on the water. The white lily was just that blown out white lacking any detail. As I planned on working the final display image in the orton style I knew it even had its limitations. Primarily the process makes the shadows extremely dark and fuzzing up the highlight details while increasing saturation. Not a bad thing but you have to control them.

The RAW image here was opened with "camera settings". The tonal range was mapped to to have a lot of highlight and shadow detail. Micro contrast and detail settings were kept to max so I would have a realistic image and detail to work with.

The orton style proceeded with the base image being duplicated into a new background layer. That layer was given the equivalent of a one stop exposure increase then blurred at a 25 pixel range. I used the "color burn" option for the blending of the layers and they were merged. Once that was done I used virtual photographer to emphasize the color contrasts similar to the old Fuji 'chromes printed on Cibachrome printing material

This image will appear tonight, framed and ready to go at the final Monrovia Art Walk tonight. You can see it (and me) out in front of the Paint n Play Art Studio and Gallery from 6:30-9:30PM.