Tuesdays meander along the river 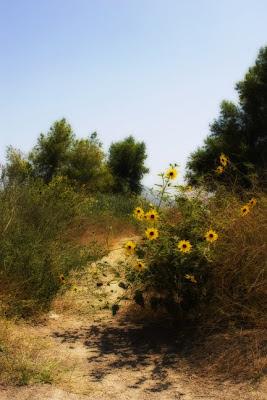 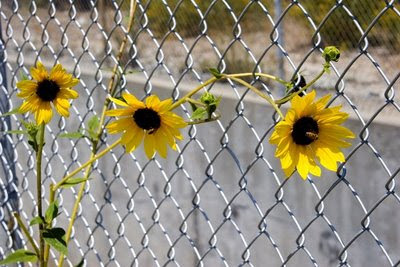 For those of you who follow my flickr account know that I do a lot of silly blogging as well as put up chunks of unaltered jpgs from my shoots.

I shot it all RAW and those files are used to produce the final images that will be in shows and available for sale through some local galleries and online sources. I will often put in some dumbed down (ie low res small versions) on flickr as well so you can get a feel for the finished pieces.

Yesterday I did manage to get myself back to the San Gabriel River, this time I entered from Duarte's Encanto Park and walked across the old Pacific Electric Bridge. What is interesting to watch is how natural elements try to reclaim things put in place by us humans. Even the tiniest crack becomes the foothold for some plant to set up its own housekeeping. Other plants use what man put in place as its own impromptu trellis. Of course we have a habit of calling them weeds when they don't have some immediate use for them.

Two images here. One is a trail along a swampier section of the river near one of the big dams that serve to slow the flow of the water through the area. The Army Corp of Engineers did this to control flooding, but also to encourage natural recharging of the local water table through seepage and percolation through the porous soils of the area. That's a good thing.

The other image follows the Man vs Nature theme that I randomly revert to. In this image a wild sunflower (I don't know its real name) has grown around and through a chain link fence and using it as a trellis to support its growth. I like the contrasts that are present on many levels. The color of nature vs gray of man, the soft flowing lines of nature vs the hard lines of man, and nature using man made objects for their own purpose.

For the "River Trail" pic I did it in the Orton style. It is a simple process with CS2. Open the raw file then duplicate as a copy closing the original. Do what adjustments are needed to bring the color in balance then use the duplicate layer function. Increase the brightness and contrast of the new layer, then use gaussian blur to a power of 15. Then those two layers were blended using the "multiply" function. It was merged together then given a final post process with Virtual Photographer for that old timey Kodachrome saturation and printed on Cibachrome one would have (could have?) done in the old silver based Orton process.

Did I tell you how much I love working in the digital realm? I can only imagine the amount of darkroom time needed to get this result. And don't forget the cost factor either which makes digital art so much cheaper than the old silver based materials.

"Sunflowers" was processed from RAW. The resulting file was manipulated in its 16bit form to bring the exposure and color balance into check. Then it was given a run through Virtual Photographer to bring about the saturation and tonal range that the earlier Kodachromes were capable of.

Enjoy, its time to run off and do some more shooting somewhere.
Posted by frazgo at 10:23 AM