HDR and Orton...putting the two together 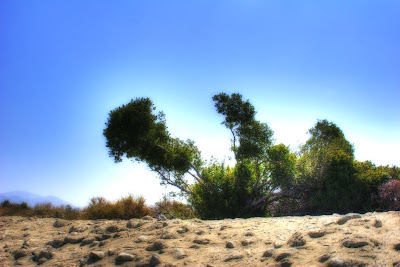 From Tuesdays shoot along the San Gabriel River. These windswept trees backlit in the early morning sun had quite a bit of drama and movement.

I shot it bracketed then merged the 3 RAW files in to an HDR file with the help of Photomatix's CS2 plug in. The same program was used for the tone mapping, coarser contrast control to allow the sky have sharper gradations to emphasize the portion where the sun was. When those were done then I duplicated the entire image as a layer, brightened it, increased the contrast and upped the saturation. The final two layers were blended using full multiply. Once that was done I merged the visible and ran the final image through virtual photographer.

End result is the trees are really the focal with their bright green spots and a nearly white back light. Enjoy...now to get a cake out of the oven and go do some more shooting.
Posted by frazgo at 10:01 AM