Rennaisance Dutch and me....

This past weekend was a literal journey up the coast to San Luis Obispo and Hearst Castle. The landscapes there are similar and different than here in the LA Basin as they get considerably more rain each year. Add in the castle and things get to be a bit other worldly.

I thought a lot about the old dutch masters while wandering about Hearst Castle as much of the interiors were decorated with pieces from the Rennaisance, but looked like they were the subjects of those old masters.

The one master everyone has heard of is Rembrandt though he is not known so much for landscapes as some of the others. Those that did landscapes that struck me the most were Van Goyen and Vermeer. Painters of the era were the first to include dramatic skies with clouds doing things rather than a pretty perfect blue sky. Van Goyen and Vermeer in particular struck me with the prominence they gave their skies and the drama it added to their final painting. Both also used very strong shadow elements to heighten the tension in the painting and bring more attention to the sky.

Clouds do add a lot to the sky and it something we notice even as kids trying to make out a face or shape out of the random fluff drifting overhead. I am certain early man watched the sky with the same wonder, and even fear as storms could wreak havoc on their mud huts and crops.

The land around the Castle does not even remotely resemble the flat plains and marshes of Holland. The clearing skies as a winter storm passed through the area had all the drama and play of light and shadow that the Dutch Masters so ably captured in their paintings. The setting and the sky, well it made me think of the old Masters as I went about shooting in and around the castle and San Luis. Once I got started I quickly switched lens to an ultrawide angle so I could capture more of the sky and all the shape and form the clouds added to the image unfolding before me.

The picture I am sharing is "San Luis Farm" I captured it just as the storm as breaking apart and a strong shaft of light from the rising sun illuminated some hills just past the farm. Now I'm thinking about taking it apart and doing a watercolor print with it. Imagine it with an impressionists twist, until then...enjoy the image as it stands in all its literal photographic simplicity. 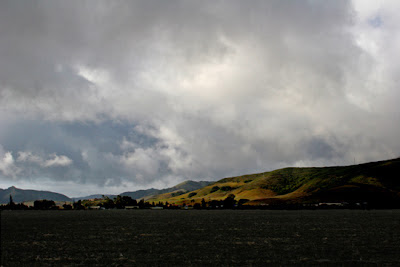