Beer goggles on visiting the rule of 3's

Silliness aside a beer does cause one to lower inhibitions and roadblocks. (The mental ones not the DUI Check points).
Today was one of those glorious So Cal days, sun out, 60's and WWII P51 Mustangs buzzing my neighborhood while I washed and waxed my cars. The first buzz I sat and blogged them on my cell phone. The second round I just stood there dumbfounded and when they made a tight circle to come back I ran and got the camera out. I managed to get a few photos for my "scrapbook" aka "Misc folder".
During dinner tonight I thought about those planes and of a rather dramatic sky we had a few days ago when a storm was coming and thought "wonder what those P51's would look like against that sky?" Fortunately I blogged that sky and had it available.
The stormy sky was shot with my Snap Che-ez camera that has an incredible arty recording of the view in front of it, poor color rendition, poor contrast, little detail and for the love a Pete the end result is every bit a Monet, Manet or similar impressionists image ready to be worked further.
I thought a bit about where to go. The rule of three in design applies to photos as well, even easier to do when you have the ability to control so much with a PC. Interestingly three also works its way into the rule of thirds in terms of photography and painting as well. Short version of it all is that your brain works best in interpreting and being excited by 3 elements within an image. Those elements if placed in the upper or lower third do more to excite the eye than dead center. (The latter I have talked about in the past in terms of horizon line placement).
So, inhibitions aside I took that stormy sky, ran it through a few filters. Then I took a nice shot of the P51's in formation cut them out and pasted them into the sky. It has its flaws, but it also has opened up a few doors for me to explore more. Photoshop sure has a lot of advantages over silver based masking and I got this done pretty quickly but I digress. Knowing these rules I sliced up a nice pic of the planes flying in a formation of 3. Then I pasted them into a heavy reworked sky, placing them into the lower third to bring more importance and drama to the sky. The planes weren't worked for some of that man made vs nature impressionist contrast I have been exploring.
So here you go...P51 Storm, enjoy!!! 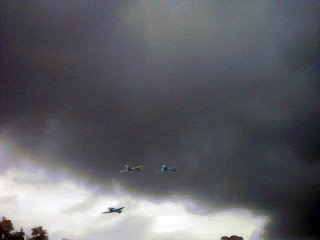 One last reminder, tomorrow (February 25, 2007) is the artists reception at Paint N Play, I'll be there, come see me, have some free booze and food while you are enjoying all the great art! It is from 3:30 to 6:30PM. The details: