Strange static in the air

Its monsoon season here in so cal and we have thunderstorms in the air. A total So Cal thing is the solo palm tree up in the sky. Blasted things are worse than bamboo for taking over a horizon line.

Maybe its the static from the storm, the impending full moon tonight, or the fires in the area adding haze to the sky but I had this total impressionistic painters thought when I grabbed this storm working into my area from the desert.

Its a toss up which of the impressionists influenced me the most Manet, Monet, or Seraut. (Bet you thought I'd say Manny, Moe or Jack...but that would be too cheap and a commercial plug). Each of those painters, Manet in his later years and Seraut a whole lot influence me. Each had a way of using abstraction to make a statement about the scene they captured so it was more emotional to the viewer than a pictorial regurgitation initiating some sort of aperient reaction to a realistic depiction of nature.

So after 8 hours of data input and work on a local non-profits October show the impressionist within needed to escape for a bit. (Am still trying to restrain the inner smart aleck and juvenile delinquent and just may purposely let that fail shortly).

I shot a storm passing through yesterday with my blogger. What struck me at the moment was the palm tree and wondered what it would be like done in an impressionists view. I snapped it with my "blogger" the che-ez snap and worked it a bit. The end result was "September Storm"...enjoy..... 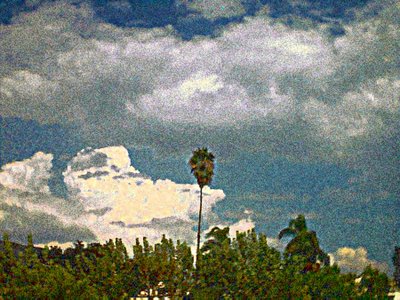 Frank, A good thunderstorm with lots of lightning, intense heavy rain, and warm air is good for the soul. There are few things missed about AZ count that among them. (plus there is the great fun of laughing at the fool who tried to drive in an area committed to drainage) Your photo of the palm tree said it all. Yesterday, I "Bullocked" Jack up to his room. I don't do well with the wise cracking bs. He told me his life was "awful". I'm chomping at the bit'til monday...