Frazgo was the last hung....that happens when they do it in alpha order. 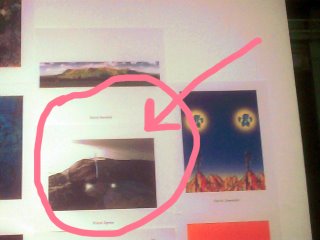 Tonight was the opening of the LA Center for Digital Art's annual Snap to Grid show. Interesting concept....nominal fee, no jury all art is hung. The center prints it all and hangs it in a grid. Its a slice of everything imaginable. Unfortunately its downtown LA so go before dark...unless of course you like living life on the edge and don't mind being surrounded but 2 legged vermin begging for spare change. Once again my pocket change went to the the dude that told me no bs...he needed it for his drugs. I can respect honesty....sheesh.

Anyway the piece I submitted is one of my experimental pieces that is part of the reality bubble series I have been doing for the last year. Short version is that I rip apart an image, some elements are left very real then wrapped in a bubble. The remaining image is altered into a sketch like rendering, the bubbles are floated back in with theatrical highlighting and other illustrative machinations to bring about a "reality bubble" or that bit of reality that drifts into our dreams. The inspiration in and of itself came about from a bout of migraines I had last year where reality drifts into a shrinking bubble as your head throbs harder. The twist now is that reality is returning and forcing itself upon the dream side of ones brain waves.

The piece chosen is titled INRI and is of a cross at the Calico ghost town cemetery. 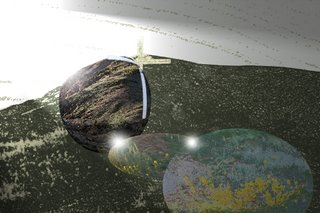