Playing in the Zone

Actually the Zone here refers to a theory of how to expose your film to get maximum contrast with clean whites and detail in the shadow. I am so glad I paid attention on that theory since I have discovered that digital sensors have a pretty narrow range and tend to be contrasty like old slide films rather than the great latitude and range negative films had. It helped a lot too to learn the bracket functions and a few other tricks on with my digi to record the scenes more on how I wanted them to print rather than let the camera do a simple meter and risk losing a lot of information. (Shooting in raw mode also makes it easier to control the final print but that's a whole 'nother set of 'splaining I don't want to get into, suffice it to say shooting in the raw is not crawling around the rocks nekkid).

While in Colorado last week the urge to shoot in B&W struck me on more than a few occasions and I got to explore the Zone System using a few of the manual controls on the "creative" side of the digi's control dial. Fun place to play, I just wish it didn't need to have so many menus to switch through for something as simple as bracketing an exposure). All that aside I think its mountains that bring out the inner Ansel in me.

I explored several of the ghost towns around Leadville, CO on my own the first few days. Pretty amazing stuff that slipped right into my exploration of nature vs man made that has intrigued me a bit the last few years. Somehow having a car on dirt roads just isn't conducive to exploring too far up the mountain, maybe the traction control light kept popping on or its just me being a chicken. (I doubt AAA would have rescued me if I had really gotten into trouble).

Luckily we found a really great 4X4 tour company that took me the places I wanted to go. If you are ever in Central CO and need such a service I highly recommend DeeHive in Leadville, CO. Our driver loaded us into an old Suburban and hauled us up into the Mosquito Range for some incredible views and equally incredibly well preserved abandoned mines. We were often above the tree line (about 12,000 feet) and could literally touch the thunderheads as they crossed over us. Our driver also gave us a pretty good running history, commentary and rumory gossip about the characters that started up the mines in the 1880's. Interesting stuff there maynard no matter how you want to spin.

So much for the background information. What I really liked about Dee Hive was their tailoring the tour to what we wanted to see and the drivers no problem with stopping on a crumbly cliff so I could jump out and get some pictures.

As your reward to my blathering enjoy these 2 pics shot while playing in the Zone. The first is the "Johnny Mine" where John Brown and his wife, "The Unsinkable Molly Brown" made their fortune. The latter picture is of "Finn Town" where the immigrants from Finland settled to work the mines. 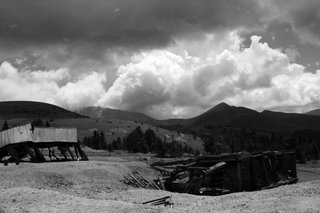 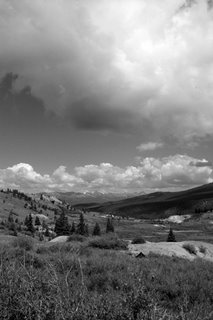