Pondering what the new year holds in store... 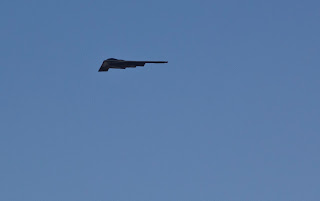 In the SGV area of Los Angeles that I live in it ain't the New Year until the B2 bomber buzzes the Rose Parade in nearby Pasadena then cruises over my 'hood making a turn back to its home base.  Its been that way for years.  Precisely at 8:02AM me and my neighbors out squealing with glee at the sight of it passing over us.

2015 was a kick ass year for me.  Long over due, greatly appreciated and humbled by some of the experiences.

2016 is shaping up to be more of the same.  In 6 short days I'm off to NAIAS in Detroit as one of Ford's guest "digital influencers".  Who said social media doesn't have benefits for even a hack like me?

Other trips include one possibly to MO in the spring, definitely TX in the spring.  We'll do a trip in April to Paso Robles with friends to see another dear friend up there who works at one of the wineries.  A couple of trips to Palm Springs, one with and another without kids.  Then a big trip in the fall...East Coast.  Either DC/Norfolk area where my youngest is stationed if he doesn't deploy.  If he deploys well then we're taking a fall color tour in NE.  Meander much?