A meander into the world of Lomo 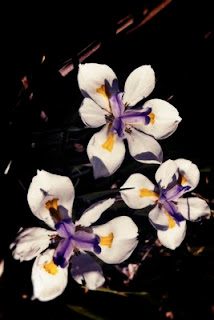 Where to start. The last month or so has been spent looking into "lomography" or "lomo" for short, which produces some pretty startling impressionistic images. Many elements go into the images. First the cameras are bests described as "toy cameras" for film, yes that silver based stuff I adore still after all these years. Second they take the old outdated film for the most part that has inherent color shifts built into it. Then they cross process it...IE negative film developed in slide film chemicals or vice versa.
The end result is multi-fold shifts in the image compared to what would have happened if you were using quality optics, optimal age film and correct processing. In short its nothing like you shot and its image quality is adorable. The edges are out of focus and the light transmitted drops noticeably. The colors shift with a pronounced blue/green shift. Highlights get blown out and darks just lose all detail. Sharpness suffers at the edges with grain appearing all over adding to the impressionistic feel.
Since I'm not about to shift all of my work to film for the odd lomo image I would want to create I looked to Adobe's photoshop to help me create the look and feel of a lomo image. After fooling around with it I just couldn't get the right result on my own. I wound up starting to google search ways to create it via tutorial so I don't have to reinvent the world. I stumbled upon this excellent tutorial that takes you through the multitude of steps needed to create a lomo style image in photoshop. It is on YouTube and its possible to pause the video between steps so you can work out an image of your own.
The image here is one I purposely shot to try to lomoize. It was successful to a great degree. In the future I need to keep in mind that high contrast scenes will work best with the process. The potential for this process to work with a variety of images is pretty terrific. Of course you need to have a strong image to start with as no amount of photoshop trickery will solve bad composition and exposure.
Posted by frazgo at 9:17 AM