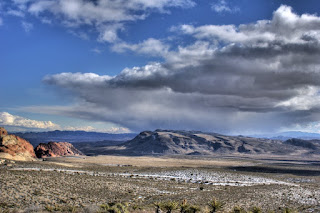 Before I lived in LA I was introduced to the Southwestern part of the country with a short stint in Las Vegas.  My folks were transferred there while I was in college and after graduation I went there to start the job searching.
I quickly fell in love with the desert.  And the mountains.  I loved the huge expanses and the many colors of the year.  One of my favorite spots still is Red Rock Canyon west of Las Vegas in the Spring Mountain Range.  Of course now its only a few minutes drive from the edge of the city compared to back in the early 80's when it was a half hour drive across open desert.  Fortunately the Canyon is in a National Forest and protected National Monument now so it will never be built up and will remain wide open.
December 26 I had the pleasure of doing something I have not done in years.  Drive the scenic loop around the canyon and just enjoy the vistas.  This time around I had the added treat of watching a snow squall line pass from Mount Potosi across the southern reaches of the canyon.  What drama in the sky.  I had to capture that storm and photo'd it from several areas in the canyon until I got just the shot I wanted.  I love the drama of the sky and how HDR and tone mapping could bring about the feel of an one Dutch masters painting of a sky in a photo based image.
The scene was shot bracketed +/- 2 stops from average with the HDR file generation done with Photomatix.  The same program was used for the tone mapping.  The final image was then post processed with Virtual Photographer for that old timey Kodachrome feel.
Posted by frazgo at 7:32 PM

Thanks, and have a most prosperous and exciting New Year Petrea!

I'm all agog. Love that scene.