Sitting here doing some show prep I kept thinking about where the photographic process has been from its inception as a scientific curiousity to a medium exploited by a new group of artists. The digital world sure makes it easier to explore those old technology's with a lot less fuss and muss.

It took a long time before a photographic paper process came along and was considered stable enough for consistent reproduction of images from a negative. Even getting to a useable negative on a transparent support took many years.

The papers of the time were not the fine grained quality type we see today, they weren't even the pure white we have now so that added to the character to the prints and unfortunately their instability. After a lot of experimentation with ways to get the light sensative silver to stick to a paper and not float about the scientists dipped back a few hundred years into the painters back of tricks and used albument, or egg whites to hold the silver on the paper for printing an image on paper. This process became known as the "Albumen Print" or "Albumen Silver Print" first patented in 1850.

It took a few more years to over come some of the early stability problems with the Albumen Prints. By 1855 a new group of patents were given to a process of "gold toning" that helped stabilize the final prints and gave them better definition and a nice warm tone most often associated with this process. This process remained the standard for photographic papers for nearly the next 50 years.

I love the look of those images, partly because of the warm tone, but also this was the period where photographers went from recorders of nature to applying artistic sensabilities regarding composition to put their spin on what they were looking at. The early processes may have lacked some hightlight and shadow detail, but the blocks of black, gray or white added to the artistic quality.

Its this area I decided to explore earlier this year, some of which were catalogued for the Whittier Art Gallery show in July. I knew already that wet watercolor softened an image. I used papers that were already a warm tone, or yellowish tint and furthered the look I wanted in the final image. I did stray from the really dark browns and yellows but otherwise kept the feel of those prints. 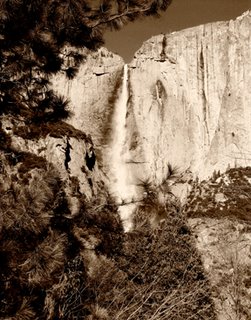