Today during show prep I stumbled across some old postcards of some old Autochrome slides sitting in the Smithsonian. I found them many years ago and had to buy them. Over the years I have sought out shows where they were a featured item. Very unique almost painterly quality to the images.

The Autochrome process was a rather ingenious development invented in France by the Lumiere brothers at the beginning of the 1900's. They died potatoato starch 3 colors then glued it onto a glass plate. The plate then was coated with lampblack to fill the spaces between the starch and coated with a silver emulsion. From there it was exposed in the camera and through some trickery in the dark room (that in itself would have gotten them burned at the stake some 400 years earlier for witchcraft) ended with a color slide.

This use of layers of colored starch produced images very similar to the Pointillism paintings of Seraut and others of the late 1800's. In both different color doalbeitbiet much smaller when its grains of starch, are placed closely together tricking your mind to see other colors. As an example a group of red dots and blue dots making something your mind blends to purple. In the end how those dots were placed together you saw a pictwhethereter it was the Autochrome image or that of a painting by Seurat. Its this link that ads a bit of romance to the Autochrome's allure.

The process was very grainy and colors remotely resembled what was in the original scene. Because potatoatoe starch was large compared to the silver grains in the emulsion the image lacked fine detail. Oddly, even with its lack of detail and fragility due to its organic nature they were the primary color photography medium until the 1930's. Sadly few have survived due to their organic nature. Those that have survived are well worth seeing when you get the chance.
So..today its the final crunch to put together a show for installation the first part of July. In the process I felt the need to supplement the watercolor photograph portion of what I am exhibiting. I worked a bit on "Lone Pine" until I got an image that paid homage to the sensibilities of the pointillists and the Autochrome's of the Lumiere brothers. 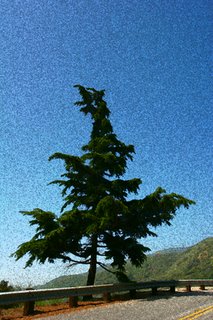