How to shoot food in the wild*

*and not be an obnoxious pest to those around you 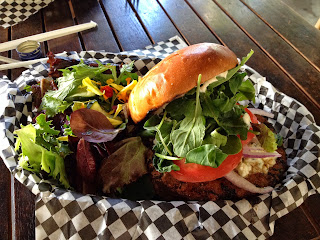 In the early 'oughts there was a photo sharing program, social media in its infancy if you will, that had a lower case "t" as its logo. I was an early adapter and for the life of me I just don't remember its name.  When they went out of business I got everything copied that I had shared on a DVD. 2 of them...most of it came from a low res cell phone and/or my Che-ez snap .2 megapixel toy camera.  It was fun and the lessons learned with those tools and food I took with me as I advanced through an iPhone.

Food photography, especially in a restaurant I was doing long before the foodies started and actually ruined it in a lot of places.  What?  Haven't you seen those pretentious snots with portable mini-lights and tripods for their cameras yet, wait you will.  Worse is the obnoxious bright flashes.  Seriously, its a pain and ruins it for the rest of us.  Like me that started doing it before the turn of the century before those dreadful hipsters and instagram showed up.

Why do I do it? Lots of reasons, primary is like to get cheffy and try and recreate the memorable meals just as I had them in some 5 star joint in 'Vegas or L.A.  Its a rolling recipe book of ideas and that picture brings back everything so I can recreate.  Also I do my own plates and later blog it over at frazgo feasting making it possible for my followers to recreate my recipes to a "T".  The cell phone, especially in its infancy was such a primitive tool that it lent a wonderful impressionistic capture that adds to the romance of the dish.  Lastly, this vast library is used for blogging all over the place and those of my food will be used in a "bloggers cook book" something that I've been toiling on for a while.

Enough of why I do it, how about some tips to do it up right.

These are pretty self explanatory.  Shooting food isn't some bit magical bag of tricks, yes commercial photographers are guilty of it.  Back in my early years I was guilty of it until I realized that the restaurant I was shooting spent a lot of time already choosing props, adjusting lighting etc., so why bother reinventing the wheel. Fresh out of college at SIU-C I had the pleasure of freelancing the restaurants for Las Vegan Magazine and learned to do just that after a couple of exhausting location shoots. Take advantage of what they provided and work with it.  Your results will show it. Your results will be better for it.
Posted by frazgo at 7:25 PM