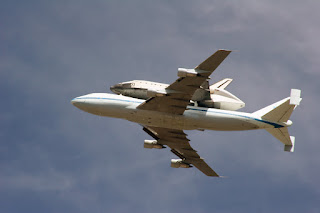 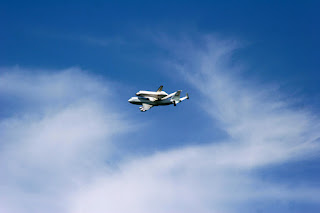 Today was one of those rarefied days in Los Angeles where everyone was consumed by the same event.  No, it wasn't another high speed chase on the freeway and city streets, its was for the fly over of the space shuttle Endeavour as it makes its final flight.

At the recommendation of my friend Susan Kitchens I went to the Gabrielino Trail head in Altadena. The spot was pretty spectacular.  It was at the edge of a tall arroyo overlooking the Hahamonga Park and watershed with the Jet Propulsion Laboratory campus on the opposite side.

The first spotting of the shuttle was when it was making a circle over Universal City or Griffith Park around 11:40AM.  It whet the appetites for the some 500 souls that gathered on that ridge to see the shuttle for more.

10 minutes later we got another view of the Endeavour atop its 747 carrier as it flew to our south over the Rose Bowl and began its slow turn back around towards us.  Gasps of "There it is" and "Here it comes" were shouted as we got glimpses of it through the trees.  Then finally it began its low and slow approach.  As it got into clear view the crowd roared with cheers and applause.  It was something to behold, all those souls celebrating as it flew overhead.

These images were worked from RAW files with the help of Adobe's CS5 raw processor.  Its funny how the color of the sky varies from shot to shot as it progress from an easterly view to that of a southwestern view as it slowly circled above us.  Its all about color temperature and reflectivity of the sky and clouds above or it flew through.

More unprocessed jpegs can be found in my flickr set.
Posted by frazgo at 8:13 PM