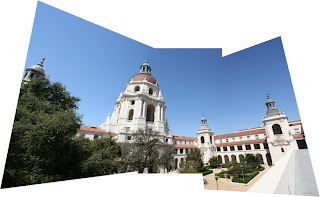 Recently I got to take a guided tour of Pasadena's glorious City Hall given by their retired PIO Ann Erdman. What a gem she is.  City Hall was opened to the public in 1927.  It was the first ever building done in the "California Mediterranean" style.  The architects blended old Italian style (you see it in the domes) with that of the California Missions seen in the courtyards and arched hallways.  They were given the mission to show "strength and abundance" to symbolise the new City Hall.  I think they did well.

Sorry gentle readers for the lack of postings.  The migraines returned as mysteriously as before, not sure of all the triggers, but the meds I was on quit after just a few weeks so we are back on the hunt for an elixir that will work.

Both panoramic images were produced with the help of Adobe's CS5.  They will get bigger with a click.

A set of images is also on flickr.
Posted by frazgo at 7:35 AM