Orton...the next path to meander down 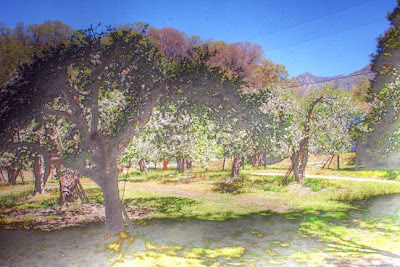 Back in the college I remember a few of the guys in the fine art program were very heavy into the orton process. They got some pretty amazing results if you were into the impressionists painting and the like. I was pretty enthralled with the idea so I too experimented in it a bit.
The process was pretty easy. You had to use slide film to in order for it to work. You exposed your first slide for accurate exposure and sharp focus. The second exposure you threw it out of focus quite a bit then over exposed it two stops or more. The two slides were then combined and printed.
I opted to do my printing on cibachrome as it was a very contrasty and saturated media compared to the other positive to positive papers and processes at the timeThe results were show stoppers as it looked like a foggy dream instead of a literal translation.
To be honest I nearly completely forgot about it until one day I spotted an image that was done orton style on flickr. Turns out they had an entire group and that got me to thinking about it all over again. It took me a few months to get around to tinkering with it, but enjoy my first experiment.
This test image from Riley's farm is a bit more involved. I took the overexposed image of a series shot for hDr. I blurred it significantly with the guassian blur tool. I saved it as a copy. I then took the normal raw frame and genderated an hdr file with the overexposed blur too. The HDR then was tone mapped and next to micro contrast controls while tone mapping. The final image was run through virtual photographer with contrasty slide overlays upping the saturation of the colors and adding a "film grain" pattern. A lot of work and definitely an example of digital art rather than a straight up photo. I liked the result now I need to get the steps needed loweredI have a lot to learn but you get the direction the next meander is taking me.
Orton in the digital world exploring the surreal in another meander I'm starting.
Posted by frazgo at 10:07 AM