You never know where my meanders will take me 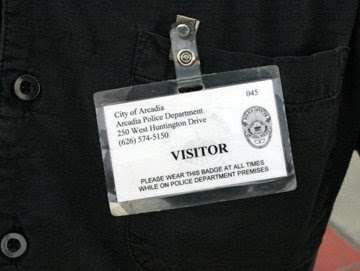 Yup the badge gives you a great big hint. Through my pictures first on Flickr then following links to me on Metroblogging.la Arcadia PD Sergeant Tom Le Veque spotted me and offered me a ride along and tour of the APD headquarters. What? I could not pass that offer up and grabbed it. Satisfied a lot of curiousity. Never rode in a police car, never spent time with an officer doing his job. You get the idea a whole lot of new experiences. The complete article I did was titled "frazgo goes for a ride, Car 64 where are you...".

What I can tell you is that an officers job is a lot of travel between calls. During those calls I got to hang out and just take pictures. I did some in HDR and others were just straight night shooting. What you see here is the end result of the purposefully shot for HDR. 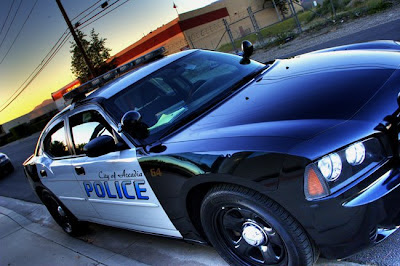 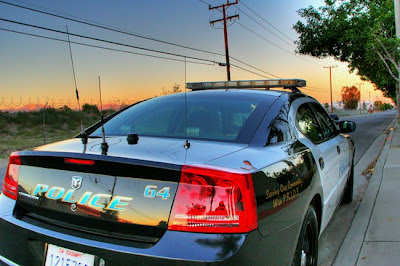 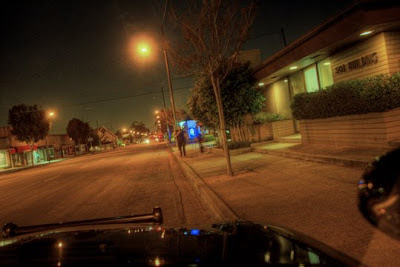 I shot these with a wide angle lens, somewhere around 20mm on the EOS20d. I bracketed and shot them +/- 2 stops and used Photomatix for the HDR file generation. The images were then post processed in Virtual Photographer.

The straight up night scene had to have quite a bit of color correction done to get it closer to reality. Damn mercury vapor lights are so orange it really skews things to far out of line. I balanced to keep it on the warm side and did dial in some contrast to get better dark in the shadows. I went for the lonely look without the total despair of letting the tones go very blue and cold.