Urban Art in the wild 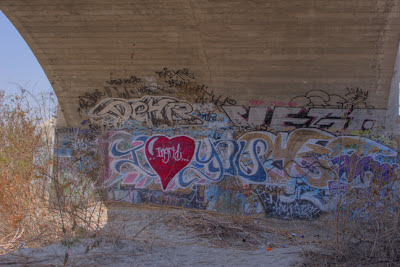 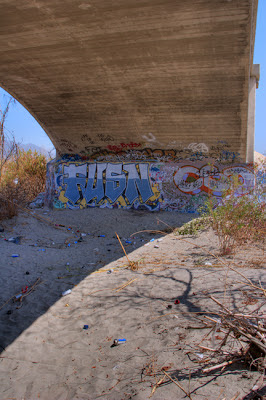 Living at the edge of the LA Metro area I do have a lot of wilderness close by. I'm not the only who ventures a few blocks from home to enjoy the outdoors.

In Duarte at their Encanto Park there is an old railroad bridge that connects it with the San Gabriel River Trail that you can use to bike all the way to Long Beach if you desire. The bridge is all nicely paved and now that the river has been off for nearly a year (not sure who or why they did it, but its LA Baby and you roll with nature being shut off) so its possible to walk under it. For years even when the river ran the Duarte East Side Gang and some other groups have been decorating and putting their own mark on the undersides of the bridge. I think DESG is gone as the incredible murals are painted and tagged over. Sad to see their art go as the tagging usually doesn't bode well.

I do have to admit that this is my favorite time of year to shoot. Now through the end of October the sun isn't as high and the resulting color shifts to the redder side of the spectrum really accentuate the warm tones of a scene. Add in the natural fading of greens as fall approaches things really warm up a bit. Late afternoon and early morning this is most noticeable and is the reason I do so much shooting at those times of day.

I shot these bracketed with 2 stops over/under exposure using the EOS 20d with an ultra wide angle to capture as much of the scene as possible and add some linear distortion. I used the 3 RAW files to generate HDR files that were tonemapped and run through Virtual Photographer to get to the final images seen here.

Thanks for stopping by and leaving a comment, always nice to know someone notices!