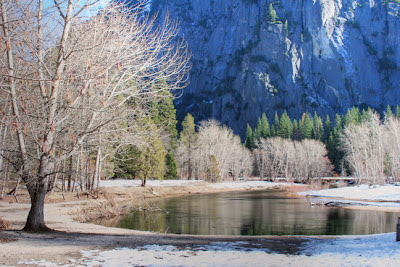 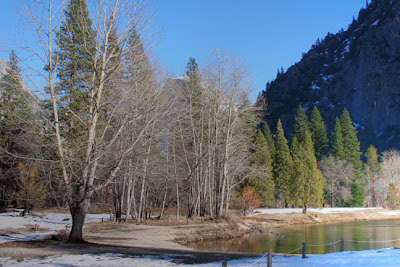 Today I continued working with the Photomatix Tone Mapping plug-in for Photoshop CS. When I first made the ditch to all digital I did a lot of my work in jpeg only mostly out of the fear of RAW shooting and wanting to get a handle on one variable at a time with the digital SLR.

Going into the process I knew that JPEG was a "losey" way to shoot as details are lost during the compression process even if you do minimal compression. I knew as well that adjusting the contrast could only do so much in terms of capturing details across the grey scale. I did a lot of bracketing only to find the contrast range of the sensor wound up leaving me with shadows absent a lot of detail when I got the mid-tones and highlights right. Just a devil in the process you have to know and learn to work with. I knew too that cold also affected how a sensor reacts to light which affects your final image.

Why I chose a place like Yosemite to experiment with the variables leaving a lot at risk, I don't know. (Probably has something to do with my habit of tossing caution to the wind and running with scissors more often than not).

Sadly, at the bottom of the learning curve I lost a lot of images learning how the sensor and camera worked together as many of my images had too many extremes to really capture the essence and spirit of the place I was trying to show.

Those frames are completely workable with the help of Photomatix Tone_mapping. I can maintain my highlights and mid-tones and still bring in all the richness of the shadows. It's this sort of salvage that makes it possible to bring back the images you shot with all the detail and emotion you wanted with the help of technology. Of course in hindsight if I had shot it all RAW in the beginning I would have had even more pixel-by-pixel data to work with, but that's part of the early learning curve with a new tool.

Of course when I shot this set along the Merced River in the meadows in the heart of Yosemite Valley I got the added bonus of warm sunlight as the sun was lowering on the horizon. The natural color shifts were "warming" up of moving towards the yellow/red end of the spectrum contrasted nicely with the gray/blue granite cliffs that were picking up the blue from the open sky above.

End result I got great contrast between warm living trees and cold granite. This played nicely as well with the softer, rounded forms of the trees contrasting with the jagged edges of the mountains too. Lots of visual interest to draw you into the photo and feel Yosemite later afternoon during the winter.

Enjoy my two view of the Merced River in the Yosemite Valley!