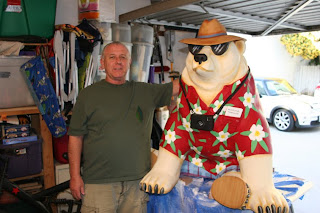 My little corner of LA is about to turn 125 and the stuff for the festivities next week is gearing up. Among the things going on in the "art city" is that we are going to be adding more public art in the form of "Art Bears".
Why bears may you ask? Because in the mid-90's Monrovia had a bear that visited the hot tubs of residents and its antics captured the hearts of the community and nation once the national news picked up on it. He was named "Samson" by the community. As he was a wild animal he did need to be restrained. Rather than euthanize him the CA Game and Wildlife folks opted to capture him before he actually hurt someone. Samson was sent off to live out the remainder of his life in a zoo in Orange County.
This bear was done by my friend Rick Kess. He is just cute as hell. After the parade next week he will be put out on display somewhere in Old Town Monrovia.
As far as my art goes...been busy sorting and uploading some choice bits onto Fine Art America the last few days.
Posted by frazgo at 10:30 AM