A little stroll with the camera 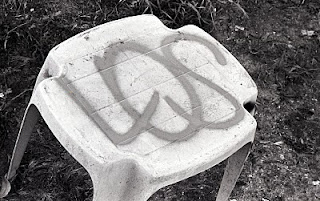 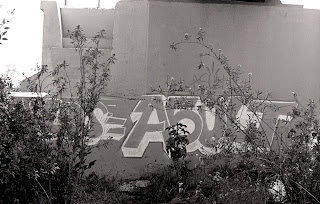 A lot going on as usual all over the place and finding time for myself to just shoot becomes a challenge. Fortunately it all came together the other day and I got to go for a walk along the San Gabriel River.
I stumbled across some new urban art under the Encanto Park Bridge in Duarte. There's a new group in town, not the usual "DESG". They call themselves "Los Asult" and have started a mural under one of the bridge pilings. How can I tell the difference between urban art and graffiti and simple tagging? Easy...one has a lot more to it other than a quick scrawl to mark territory. Compare the piling with the simply tagged chair. Says it all.
The one thing I've noticed about doing my own B&W work again is that I do miss the instantaneous thumbnail at the back of the camera that tells you if you got your exposure and composition right. Require much more focus rather than spontaneity when shooting. Not that the latter is a bad thing, as its not. I've discovered, or re-discovered that I like the forced concentration that working in film requires with a manual camera. A lot of thought goes into the process for exposure etc., than with a DSLR. I like it. A lot.
Of course the lack of spontaneity has its draw backs too. The process of doing ones own film and then getting it scanned is time consuming and finding a morning free to devote to it is difficult. But I'll still take it as the rewards at the end make it worth it.
Posted by frazgo at 11:37 AM