HDR to the rescue 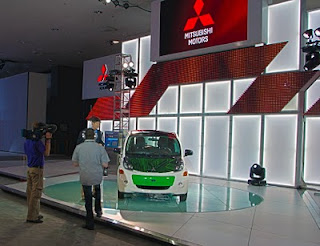 This image would have been nearly impossible to capture without the aid of HDR post processing? Why you ask? Well the "wall" behind was actually a bank of white plexi that was back lit and several stops brighter than even the spot lit car. Shooting it bracketed +/- 2EV solved the problem when I used those files to generate an HDR image.
The final image was then tone mapped with Photomatix. After that it needed no other post processing 'cept for some minor color correction work.
The car is the Mistubishi i-MiEV (electric car) due on sale later this coming year. More about the car on So Cal Auto Blog.
Posted by frazgo at 5:22 PM