A little stroll along a running river 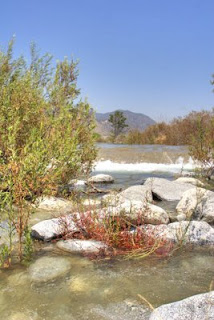 The San Gabriel River is running again. The powers that be in the Army Corp of Engineers that control the flow of the river opened up the spigot upstream and we have a river again. With this week being the hottest of the summer it is welcome relief to be able to just hear the rushing water while walking about and taking pictures.
This image was shot bracketed for hdr post processing to allow some of the waters movement to create off register portions to accentuate the movement in the final image. OF course being able to fine tune micro-contrast and your white/black levels helps with the final image. You'll note I still like a nice clean black in an image even when I'm working with hdr which in theory would have it a dark gray and details. That stark black for me creates an more anchor point for the brain as it processes the image. The final image was washed in Virtual Photographer to give it the look of the soon to be defunct old-timey Kodachrome.
Posted by frazgo at 6:52 AM